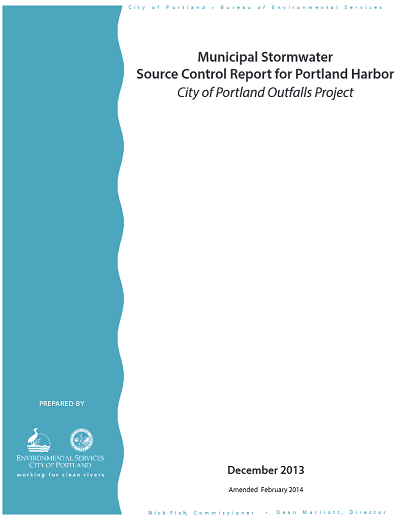 In January 2014, Environmental Services delivered to the DEQ the City of Portland Municipal Stormwater Source Control Report for Portland Harbor. The report describes:

As a result of this effort, more than a dozen new sites joined the DEQ voluntary cleanup program and along with about 40 other sites are investigating and controlling contaminant discharges to the city stormwater system under DEQ oversight.

Information in the report will be used by the DEQ Cleanup Program to demonstrate to EPA and other stakeholders how upland source control will be achieved in Portland Harbor, which is critical to the success of the harbor-wide sediment cleanup.

The Closure Report includes an Outfall Basin Completion Summary for each of the municipal outfalls covered by the project.

Use the links on this page to access the report.

Appendix A-Closure Report for the City of Portland Outfalls Project