(June 4, 2018) – It’s time to plan ahead for this summer’s Springwater Corridor closure. From July 1 to October 31, a section of the popular trail will be closed around Oaks Bottom Wildlife Refuge as contractors replace an undersized culvert to bring salmon back to the refuge and restore habitat for about 175 species of wildlife.

Starting this week, people entering the Springwater Corridor from two major trail gateways will see these series of signs: 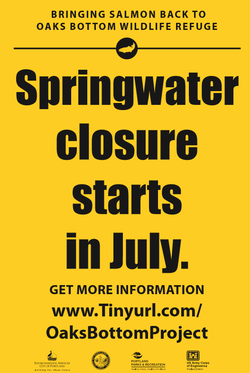 Summer Springwater Closure / Oh yes, it’s true / But don’t be too blue / There are options for you / www.Tinyurl.com/OaksBottomProject.

And a second series:

Springwater closure in July / If you ask: Why, oh why? / Oaks Bottom project is bringing salmon back!  / Keep your journey on track / www.Tinyurl.com/OaksBottomProject.

The sequential signage comes with information delivered by street teams – Environmental Services staff are being deployed at the Sellwood Park corridor entrance during the Tuesday June 5 and Friday June 8 morning commute hours (7 a.m. to 9 a.m.).  The street teams will provide project information, answer questions, hand out a map of alternate routes, and even fix flat tires if needed.

(During the evening commute hours on those days- 4:30 p.m. to 6:30 p.m. - staff will be near the north entryway, at a picnic area pullout along the corridor a half mile from the Springwater Corridor entryway at SE 4th Avenue and Ivon Street.) 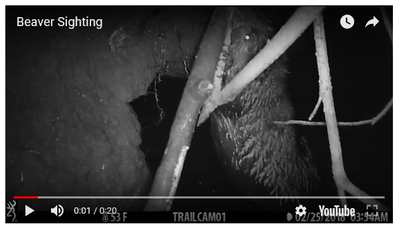 Also this week, Environmental Services is posting video footage from its “critter cameras” showing glimpses of the hidden life of animals at the wildlife refuge. The cameras, set up by Environmental Services’ scientists, have captured scenes of beaver at work, an otter catching a fish, a mink, a great egret and more.

It’s all part of project outreach to ensure that people have early and ample notice about the Oaks Bottom Habitat Restoration Project and its impact for Springwater travelers.

During the project, the trail will be OPEN to the refuge, but CLOSED as a through route.

An alternate route map features two main options for people on bicycle and other non-motorized travel:

In addition to those newly improved routes, many other options exist in the city’s extensive bicycle network. Pedestrian trails will remain open within the refuge. Bicycles are not allowed on unpaved trails. Access to the Oaks Amusement Park and Oregon Yacht Club will be maintained from the south throughout the duration of the project.

During the restoration project, crews will cut an open trench in the berm, including the Springwater Corridor trail and railroad tracks. They will replace a small pipe culvert with a large open bottom passageway to allow salmon to access the wetland refuge for food and rest from the Willamette River.

The project also will improve the water flow in the refuge’s tidal slough channels to benefit all wildlife, including the 175 species of birds that use the protected area.

The habitat restoration project is a collaborative effort between the City of Portland’s Bureau of Environmental Services and Portland Parks & Recreation and the United States Army Corps of Engineers, which will manage construction.  Oaks Bottom Wildlife Refuge, established in 1988, is one of only two wildlife refuges in the city and the largest remaining natural area in the lower Willamette River floodplain. The site is managed by Portland Parks & Recreation.

This project is part of a series of collaborative restoration projects between the City and the Corps. The agencies recently restored Westmoreland Park and Crystal Springs Creek, which is now designated a city salmon sanctuary. Next, after Oaks Bottom, is a major project in Tryon Creek that has received Congressional authorization but is awaiting funding to replace a salmon-blocking culvert and restore salmon access to that area’s prime habitat.