(July 9, 2018) The City of Portland and U.S. Army Corps of Engineers advise the traveling public to be aware of additional bicycle traffic through the Sellwood-Moreland neighborhoods and the South Waterfront as the closure of a popular segment of the Springwater Corridor takes effect this morning.

A major restoration project to benefit salmon and other wildlife will close a section of the trail around Oaks Bottom Wildlife Refuge starting 7 a.m. Monday, July 9, and is scheduled to continue through October 31.  This is a hard closure – all hours, all days. 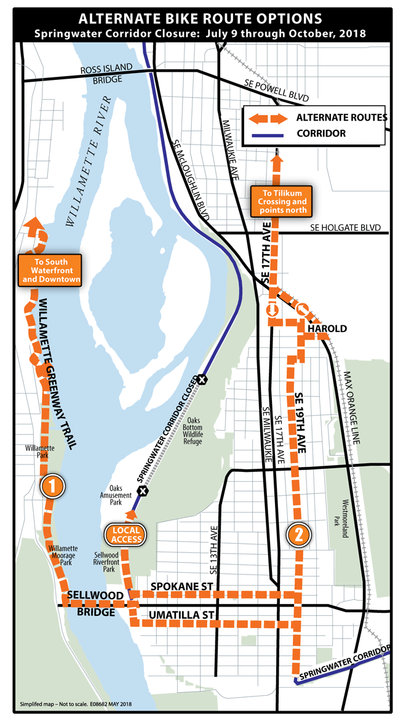 Upwards of 2,000 people use that corridor daily and now will choose from an array of alternate routes along neighborhood streets and trails and along the city’s network of bicycle lanes, adding to the usual summer uptick in bicycle travel. The traveling public is asked to be alert, respectful and patient as travel patterns adjust during the closure.

As with all construction projects, people are asked to use caution, obey traffic laws and expect some delays.

In particular these alternate routes and intersections are expected to experience additional bicycle travel:

For additional information view the June 28 traffic advisory as well as project page and map of alternate routes: www.portlandoregon.gov/bes/oaksbottom

US Army Corps of Engineers: