(October 22, 2018) - Commissioner Nick Fish joined with other City of Portland officials and the US Army Corps of Engineers on Monday to showcase the newly restored Oaks Bottom Wildlife Refuge and its main feature– a new, large fish-friendly passage that benefits salmon and other wildlife.

The commissioner also announced that the Springwater Corridor trail, closed for four months for the project, will reopen on time Thursday, November 1, 2018.

“Instead of a small culvert, we now have a ‘salmon subway’ that reconnects the Oaks Bottom Wildlife Refuge and the Willamette River for the first time in over 100 years,” said Commissioner Fish. “Juvenile salmon now have a rest stop on their journey to the ocean. I look forward to biking here with my son and enjoying nature in the heart of our urban environment.” 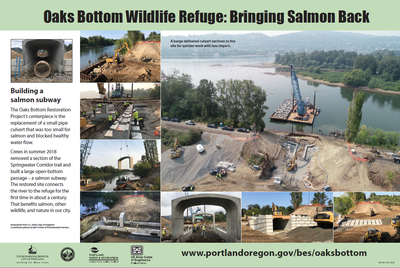 The major restoration is a joint project between the two bureaus the commissioner oversees - the City of Portland’s Bureau of Environmental Services and Portland Parks & Recreation – and the US Army Corps of Engineers. The Army Corps is paying $5.72 million, or 65 percent, and Environmental Services is paying just over $3.1 million, or 35 percent, of the total project cost of $8.8 million. PP&R manages the refuge and trail.

In addition to replacing the small pipe culvert that had blocked fish access, crews also improved the stream flow within the refuge and created a winding channel to enhance habitat for fish, otter, beaver, amphibians and other wildlife, including 175 bird species.

The construction team had a mandate to complete most work during the “in-water work window” between July 1 and October 31, the timeframe allowed by law to minimize impacts on federally-protected salmon. During that time, the Springwater Corridor trail has been closed to through travel as crews cut open the berm supporting the trail to excavate and replace the culvert.

“We are excited that the work will be done as scheduled and trail will open on November 1,” said Lance Helwig, chief of engineering and construction for the US Army Corps of Engineers’ Portland District. “Some important safety-related work needs to be completed between now and then, and we thank the community in advanced for its continued patience. Opening a safe trail over the new culvert is our top priority.”

Remaining construction activities that will be completed on time for reopening include the installation of safety rails on the trail and along a new small overlook at the culvert site. Until work is complete and the trail is safe for reopening, barricades will remain in place.

Once the trail reopens, the public will be able to see the new channels from the trail. Over winter, erosion control fabric along the channel’s banks will protect the soil. Native seed installed under the fabric will sprout and grow. In spring, which is the best time to plant trees and shrubs, Environmental Services crews will plant about 8, 500 native trees such as cascara, red alder, willow, cottonwood and dogwood.  A new viewing platform will also be built closer to the open water at the edge of the restoration site.

“Just as we return to a remodeled home, wildlife will return to this newly restored area of the refuge,” said Dawn Uchiyama, deputy director for Environmental Services, the project lead for the City. “Habitat that is good for salmon is good for other wildlife. The refuge is a space where beaver will once again thrive.  And river otter, freshwater mussels, and migrating birds will claim as their own.”

“We invite Portlanders to stop and really notice the wild nature in our city,” said PP&R Interim Director Kia Selley. “Oaks Bottom Wildlife Refuge was established by the community. It used to be a landfill slated for development. But with Portland Audubon Society and other community partners, the City saved and restored the area as a beneficial and popular wildlife refuge in the heart of Portland. This is a new chapter in restoration, and one which will be beneficial for nature and people for generations.”