“I have always believed that government can be society’s greatest force for good, and that together we can do amazing things.” – Commissioner Nick Fish

(Updated Feb. 12. 2020) - Environmental Services staff will join with the late-Commissioner Nick Fish’s family and the community in a celebration of his life on Feb. 16 at 3 p.m. at Portland State University’s Smith Memorial Student Union Ballroom, 1825 SW Broadway. The event is open to the public, but seating is limited, says PSU. The memorial will be livestreamed at the student union and at https://www.nickfishforportland.com/.

Commissioner Nick Fish, who oversaw the Bureau of Environmental Services as well as Portland Parks & Recreation, died of stomach cancer Jan. 2, 2020, just two days after sending this message to the community.  Environmental Services mourns his passing and is grateful for his leadership and spirit of service.

"We hope that this first public celebration will begin to release our grief toward healing as well as inspire service to the community in Nick’s memory, and we look forward to other gatherings," said Nick Fish's widow, Patricia Schechter.

Commissioner Nick Fish called his 11 years of service on the Portland City Council, “the great honor of my life.” He was loved and respected in City Hall and throughout Portland for his many years of service to the community. He was passionately committed to protecting and improving the environment, helping people experiencing houselessness, and working to bring more affordable housing to Portland, among many other initiatives and accomplishments. Commissioner Fish passed on in early January after battling abdominal cancer since 2017. He is survived by his wife and two children.

Nick was always proud to lead Environmental Services, and he admired and strongly supported our work. He was particularly passionate about the RNG (Renewable Natural Gas) initiative at the Columbia Boulevard Wastewater Treatment Plant and popularized the informal name “Poop to Power” project after his son coined that term. He was an advocate for our work helping salmon return to and thrive in Portland’s waterways, including the Crystal Springs and Oaks Bottom restoration projects. He also advocated for the Portland Harbor Superfund cleanup project and worked closely with BES staff to accelerate the EPA-led cleanup of river sediments.

In addition to his work with BES, during his City Council career Nick oversaw the Water Bureau, Portland Parks and Recreation, and Portland Fire Bureau. His advocacy for affordable housing led to the creation of the Portland Housing Bureau in 2009. He supported the City’s work to fight climate change and was an advocate for increasing equity and inclusion in City government and the community. He championed Project SEARCH, which places young people with disabilities in the workplace, including at BES. He cherished his role as the City liaison to Elders in Action and supported their work to empower and engage older adults. His accomplishments are truly inspirational, and he was a role model for many of us. You can read more about his extensive record of accomplishments here.

Nick was a kind, caring, and compassionate friend and will be remembered as a tireless, fierce advocate for all Portlanders. We can carry on his legacy and honor him by continuing our work to protect and restore Portland’s watersheds, working to promote equity and inclusion at BES and in our community, and by supporting each other during difficult times. I am grateful and honored to have had the opportunity to work with Commissioner Fish and will always remember him with love and respect. 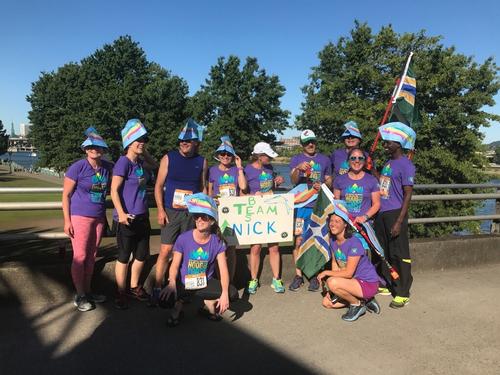