Portlanders are one step closer to gaining greater access to healthful, locally-grown food in their neighborhoods. On April 24, 2012, the Planning and Sustainability Commission (PSC) unanimously approved the proposed zoning code changes in the Urban Food Zoning Code Proposed Draft.

The Urban Food Zoning Code Update project recognizes the connections between food and the community’s environmental, economic and physical health and promotes traditional and emerging ways of producing and distributing food.

The recommended changes support community gardens, farmers markets and small scale market gardens. Alternative distribution methods such as community sponsored agriculture (CSA) and food buying clubs were also promoted at a scale that is appropriate to neighborhoods and helps build community. Project staff was aided by a Code Development Advisory Group, which helped sift through the existing code regulations and develop recommended changes that support these activities, while also protecting the surrounding neighborhoods.

The Urban Food Zoning Code Recommended Draft, which is the PSC recommendation to City Council, will be published by May 21. The City Council public hearing is scheduled for Thursday, June 7, 2012, 2 p.m. time certain in the Portland Building, 2nd floor auditorium, 1120 SW 5th Avenue (across from City Hall).

If you operate a market garden, food membership distribution site and/or farmers market, visit www.portlandonline.com/bps/foodcode to learn more about "grandfathered rights” and fill out a short questionnaire to be included in the inventory. This will establish your right to continue to operate at your current level — even if you don’t meet new regulations approved by City Council. Project staff is offering this inventory as a service; after June 6, 2012, you will be required to go through a more rigorous process to document that you existed and are eligible for “grandfathered rights.”

For more information, please contact Julia Gisler at Julia.gisler@portlandoregon.gov or 503-823-7624.

At BPS, community outreach happens with a tailored approach to engage community groups in their own neighborhoods. This winter, BPS’ ReTHINK program partnered with the Portland Alumnae Chapter of Delta Sigma Theta Sorority, owners of the June Key Delta Community Center (JKDCC). They were selected because of the organization’s long history of community involvement and leadership within Portland’s African American community. 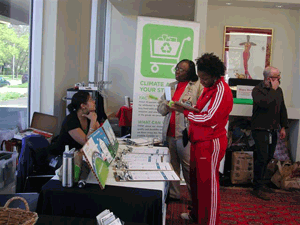 The ReTHINK program partners with host organizations to provide sustainability and climate change education through a series of three workshops. Hosts are selected for their ability to reach diverse and/or  low-income residents and to engage their members in a community action project. The goal of the program is to empower communities with both the information and the resources to make meaningful progress in reducing carbon emissions.

This past year, the ReTHINK program was expanded to include a small grant for the host organization to implement a community action project related to climate change.

Additionally, JKDCC is on its way to achieving the highest green building certification of a Living Building, reflecting the organization’s commitment to sustainability. They applied to ReTHINK to inspire their members and community to engage in practices that would support the goals and values of the Center and that can be applied at home.

On Saturday, April 21, 2012, community members gathered for an array of workshops and family friendly Earth Day activities at the Center. The theme for JKDCC’s Earth Day event was “Healthy People, Healthy Planet”, emphasizing that what is good for the community is good for the planet, and vice versa. Workshops included composting, gardening, nutrition, and DIY energy conservation.

“We remain committed to educating our members and the surrounding community on the impacts of climate change and opportunities to make a difference. Earth Day participants continue to discuss and practice the lessons learned during the event, we anticipate that the impact of these lessons will multiply throughout the community.” Vera Pool, President of the Portland Alumnae Chapter Delta Sigma Theta Sorority, Inc.

The ReTHINK program will continue this spring at Self Enhancement Inc. If you are interested in the ReTHINK program for your community group, contact Desiree Williams-Rajee at desiree.williams-rajee@portlandoregon.gov.

Over the past year, BPS and the Bureau of Transportation have been working with Cully residents, property owners, bike and pedestrian advocates, and the business community, among others, to collect and analyze data, and hear public opinion on the Cully Main Street and Local Street Plans project. Project staff subsequently developed a Proposed Cully Main Street and Local Street Plans Implementation Report to respond to the community’s desire for a neighborhood-serving main street and an improved street system.

The recommendations in the implementation report include select zoning changes along Cully Boulevard and Killingworth Street area to allow more commercial, residential, mixed-use and employment in the area. The report also includes a local street plan for the Cully neighborhood to increase street connectivity, develop new designs and funding options for implementing local street improvements, as well as prioritizing Cully community street improvements.

The PSC reviewed the proposed draft and invited public comment. Testimony generally supported main street proposals. However, questions were raised about how the local diverse population could benefit from the plan, specifically through local job development. Testifiers also commented on the local street plan design options and street improvement priorities.

Subsequently, the PSC unanimously voted to endorse the plan and asked that staff revise the report to include more discussion about the impact of potential gentrification and displacement. The report will then be forwarded to City Council for final action at a public hearing in summer 2012. Stay tuned to www.portlandoregon.gov/bps/cully for exact dates and times or for more information about the project.
###

The recent two-year Climate Action Plan progress report shows that total local carbon emissions continue to decline. BPS and Multnomah County Office of Sustainability presented the report  to City Council in April. The guiding document for the City and County’s response to climate change, the Climate Action Plan is a three-year plan to put Portland on a path to achieve a 40 percent reduction in carbon emissions by 2030, and an 80 percent reduction by 2050.

By the end of 2010, total emissions were 6 percent below 1990 levels, while national carbon emissions are up almost 12 percent over the same period. On a per person basis, Multnomah County carbon emissions have dropped 26 percent since 1990.  (Local population has increased more than 25 percent in this same period.)

"We’re making solid progress on our ambitious Climate Action Plan goals, in part because we’re creating a more connected city. Portlanders now have more low-carbon options to get to school and to work, more efficient ways to heat and power their homes and new ways to deal with household waste," said Sam Adams, mayor of Portland, Oregon. "I’m excited to see this progress continue as we implement the Portland Plan."

The report provides status updates on all of the actions called for in the Climate Action Plan. Highlights include:

"No single action, nor single entity—public, private, non-profit, or individual—is responsible for these accomplishments,” added Susan Anderson, director, Bureau of Planning and Sustainability. "Instead, they are the result of many thousands of people, businesses and organizations taking action every day—at home, at work, and at play."

The Year Two Progress Report and the complete Climate Action Plan are available at http://www.portlandoregon.gov/bps/49989

Sometimes it’s hard to visualize future changes to our neighborhoods based on diagrams and maps of land use  concepts. But at a May 3 community forum about the future of Barbur Boulevard, nearly 50 community members were able to see photo simulations of different possible development scenarios along the southwest corridor. 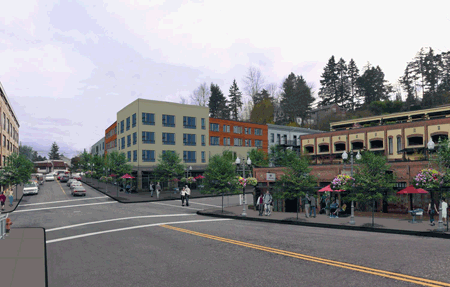 At the community forum, City staff and the Barbur Community Working Group presented the audience with background and history of the boulevard, a summary of the corridor's opportunities and limitations, and photo-simulations or visualizations of possible building forms and arrangements for a few areas in the Barbur corridor. Participants were able to vote on different scenarios for future development, and the results will be used to help shape the concept plan.

Photo caption: One scenario showing a moderate level of mixed use along SW 13th Ave between Barbur and Bertha

All Portlanders are welcome to make their voice heard about the future of Barbur Boulevard by taking a survey similar to the one used at the community forum. The presentation and other background materials are available at www.portlandonline.com/bps/barbur for reference.

The Barbur Concept Plan will create a long-term vision for the six-mile Barbur Boulevard corridor, from Portland’s Central City to the Tigard city limit. Beginning in summer of 2011, the Community Working Group began exploring alternative land use concepts for the corridor through a public process that will last 18 months.

For more information about the project and/or to take the survey, go to www.portlandonline.com/bps/barbur. The survey is open until June 15.