In a previous post, we discussed how Portlanders in the past few decades have steadily shifted their preferred way of commuting to work away from driving alone to more active transportation options. Recall in 1990, 68 percent of commuters drove alone to work. By 2000, that number was down to 64 percent. In 2011, less than 60 percent of Portland workers were driving alone to work. 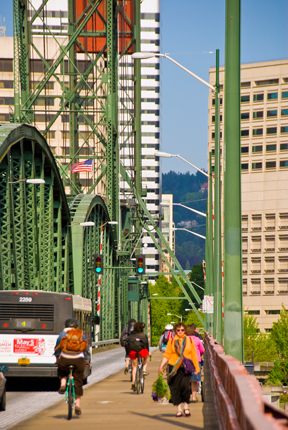 In this follow-up post, we’ll discuss how that trend will most likely continue over the next few decades, given demographic trends. And keep Portland on track towards its goal: by 2035, 70 percent of commuters will either take transit, bike, walk, telecommute or carpool.

Portland is on the path towards that future, but much work still must be done. The good news is, we have demographics on our side. Over the next few decades, the scales may tip with the preferences of the baby boomers and their children — the Millennials — of the later 1970s, 80s, 90s and early 2000s.

Combined, they are the largest population group. And their preferences will shape the mobility landscape in the years to come.

Just as boomers’ preference for driving shaped the development of the country over the last forty to fifty years, so too, as they age, will their increasing preference to take transit shape how the urban landscape evolves. Their children, who make up an even larger group than the boomers, will have a similar impact, if not more.

How these demographic groups choose to live and get around will have an impact on all Portlanders.

The American Assocation of Retired Persons recently reported that as baby boomers move into retirement age and older, driving will continue to steadily decline as an option for getting around. And more and more seniors will increasingly depend on a variety of public transportation options.

On the other end of the age spectrum, fewer teens, 20-somethings and early 30-somethigs are falling in love with the car culture. Fewer young people are getting their driver’s license. Researchers and various media report that between half and two-thirds of 18-year olds had their driving licenses in 2008; in 1983, more than 80 percent had their licenses. And they’re buying fewer cars.

Millenials also don’t mind getting around by transit, walking or biking. Carpooling and even car-sharing is an acceptable alternative. Owning a car is not out of the question, so long as they do not have to spend so much of their income on a monthly payment.

Millenials also prefer — even demand — a more urban lifestyle. They tend to want something different from the suburban way of life of their parents’ generation. Most young workers today want to live in a more urban setting.

And more and more, too, Millenials are choosing to live alone (or with a dog). Thus, the trend is towards smaller and smaller households that demand less space.

Given these demographic trends, a variety of policies will need to be put in place to address mobility and access services and the complementary land use activities that reinforce such services. To be sure, over the long run, investment in public transportation to make it more accessible to seniors will also benefit young working adults. And building communities that invite more transit use, walking and bicycling, while also supporting affordable and inclusive housing options, will help spread the benefits of good living to all Portlanders.

Given these preferences of the two largest population cohorts, it should be no surprise, then, that a high probability of better quality urbanism is in all of our futures.

Federal tax credit extended for purchases made in 2013

In 2012, Portland moved forward on many fronts — and I am pleased with the substantial accomplishments that were made in collaboration with BPS and dozens of community, business, nonprofit, academic and other partners. Here is a sampling of our progress:

2013 brings new City leadership and the opportunity for new vision and collaboration. A major effort underway for BPS is the development of our new Comprehensive Plan. As a once-in-a-generation update, it is a comprehensive task requiring all hands on deck! Dozens of community, business, academic and neighborhood leaders are working on this project as part of the Policy Expert Groups. These advisory groups are focused on such topics as housing, economic development, watershed health, community involvement, infrastructure, neighborhoods and transportation. Their work will be stitched together within the new Urban Design Framework, which forms the basic structure for the physical components of the Comprehensive Plan.

As you’ll read further on, the Comprehensive Plan – Working Draft Part 1 has recently been published, and public feedback is needed. We hope to see some of you at workshops around the city in February and March. Or visit us at www.portlandoregon.gov/bps/pdxcompplan and tell us what you think.

Many other efforts are underway this year:

So as you can see, 2012 was a busy year, and we have much exciting work ahead. We hope our efforts, and our business and community partnerships, have provided a benefit to your household, neighborhood or business. Let us know how we can work with you to build a more prosperous, healthy and resilient community.

Bureau of Planning and Sustainability

Portland’s Comprehensive Plan has served the city well since 1980, but it’s time to give it a complete overhaul so that it reflects the Portland of the 21st century. The Bureau of Planning and Sustainability is taking the lead on this citywide effort to manage the location of population and job growth, as well as public investments in infrastructure (such as streets, sidewalks, parks and stormwater systems) over the next 20 years. The new Comprehensive Plan will set guidelines for community involvement and influence the direction of private development and public facilities — all to ensure that Portland is a more prosperous, healthy, educated, equitable and resilient city.

While the Portland Plan set goals and policies for economic development, housing, education, transportation and watershed health, the new Comprehensive Plan will help implement them through more specific city policies to help us make better on-the-ground decisions in our neighborhoods. With the Comprehensive Plan as the foundation, we can improve zoning and provide direction prosperous and sustainable development throughout the city. These ideas will then be represented through a set of maps and a list of capital projects.

The Comprehensive Plan Update is being developed with the help of more than 160 community members, technical experts and City staff from a variety of bureaus who serve on eight different advisory committees called Policy Expert Groups (PEGs). Now it’s time for the entire city to have a say in how this long-range land use plan will evolve.

“We need your help to bring this document from a “60 percent draft” to 100 percent,” says Bureau Director Susan Anderson. “The draft Comprehensive Plan is a work in progress, which means there are still areas to be fleshed out and detail to be added. I encourage all Portlanders to join me at a workshop or give us your feedback in whatever way you can.”

Portlanders are invited to review and comment on the Working Draft Part 1, available on the Comprehensive Plan Update project website at www.portlandoregon.gov/bps/pdxcompplan. Printed copies are also available at Multnomah County libraries throughout the city and at the Bureau of Planning and Sustainability.

The Working Draft Part 2, available this summer, will include draft maps and a draft list of capital projects.

In February and March, City staff and partners will be sharing information and soliciting feedback through a series of community workshops in six different locations.

For more information about how to engage, visit the Get Involved section of the Comprehensive Plan Update website at www.portlandoregon.gov/bps/pdxcompplan.

Homeowners in Portland’s historic and conservation districts will have an easier time making minor modifications to their homes when a proposed set of code amendments is adopted. In response to community concerns about the time and expense involved in historic design review, the Bureaus of Planning and Sustainability and Development Services developed this proposal in collaboration with homeowners, remodelers and historic resource advocates.

The goal of the Historic Resources Code Improvement Project is to streamline the regulatory process around historic design review. The project team has been looking at ways to create a quicker, easier-to-understand and more predictable review process for projects with minor impacts on historic resources, as well as clarifying code definitions and other code clean-up measures.

Council is expected to hold a hearing on the code amendments on Feb. 27, 2013, at 9:30 a.m. The recommended report will be available the first week of February. The adopted code amendments will be effective 37 days after the City Council vote.

After adoption, the project team will continue its work to improve the regulatory process and provide benefits to homeowners in the historic and conservation districts. The code amendments may also allow the Bureau of Development Services to reduce historic review fees for smaller projects in the near future.

For more information about the project and how to get involved, please visit the project website at www.portlandoregon.gov/bps/58976 or call 503-823-5869.