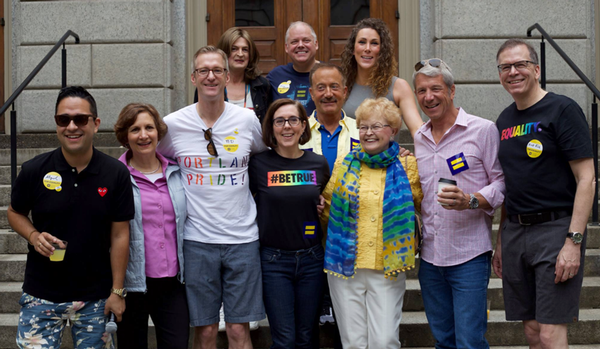 The first six months of 2017 were unprecedented.

A new Mayor and Commissioner. A new President. A surge in hate crimes. Disruptions at City Council. Resistance and progress.

At City Hall, I am working with the community to protect our values. At a time when we can’t count on leadership from Washington, I’m proud of our progress at the local level.

In response, the City Council took a number of important actions, including:

• Adopting a “Sanctuary City” resolution – sending a message to Portland’s many diverse communities – you are welcome here.

I participated in numerous public forums, opposing the rising tide of hate and intolerance. My family proudly marched for women's rights.

And I authored an essay, published in Street Roots, defending funding for Legal Services.

In May, a savage attack on a MAX train left two dead and one injured. As our community grieved, we also celebrated the heroism of three Good Samaritans: Rick Best, Taliesin Myrddin Namkai-Meche, and Micah David-Cole Fletcher. I was honored to attend the celebration of Rick’s life and service.

Council adopted a new budget to guide our work in 2017-18. The process, led by Mayor Wheeler, was collaborative and inclusive.

The budget funds many of my priorities, including:

And, for the fourth year in a row, we adopted responsible utility rates, continuing to prioritize basic services and preparations for the “Big One.”

Council took a number of key actions to address the housing crisis, including:

• Allocating over $26 million to the Joint Office for Homelessness.

• Appointing an oversight body for the recently-passed Housing Bond. My appointee was Todd Struble, a leader with APANO and the Jade District.

• Adopting landmark renter relocation assistance, to help soften the blow when renters are displaced because of a no-cause eviction or an excessive rent increase.

• Establishing a $2 surcharge on short-term rentals to fund affordable housing.

• Creating an “Office of Landlord-Tenant Affairs.”

• Lobbying the State Legislature for two key reforms: an end to no-cause evictions, and lifting the pre-emption on rent stabilization.

And I continue to push for more resources to fund “permanent supportive housing” – affordable homes with the services low-income adults and families need to be successful.

Our Clean and Green Future

The Council took bold action to combat climate change and support a clean energy future. On the day that President Trump announced his intent to withdraw from the Paris climate accord, we adopted a goal of 100% renewable energy by 2050.

Mayor Wheeler and I are leading the City’s efforts to clean up the Willamette River. While changes at the EPA pose significant risks to our environment, we are committed to engaging all of our stakeholders and moving the Superfund process forward.

And, our public utilities are doing their part. We're planning for the future by making cost-effective investments in resilience, energy-efficiency, and green infrastructure.

BES announced an innovative plan to convert 100% of the methane gas from our sewage treatment process into renewable energy. The result is a triple win. We'll reduce greenhouse gas emissions, replace dirty diesel fuel with clean natural gas, and deliver a profit for our ratepayers.

The Water Bureau dedicated a new pump station in Willamette Park. The Hannah Mason Pump Station is built to survive the “Big One.” And working with the Energy Trust of Oregon, it will save ratepayers $160,000 a year in energy costs.

In every corner of our city, volunteers help BES make our city cleaner and greener. From Green Street Stewards, who plant new vegetation and remove sediment from bioswales, to community partners who care for our urban watersheds. Together, we’re making Portland a healthier city and bringing salmon back to our neighborhoods.

Portland is fortunate to have an abundance of clean, safe, and reliable water. Working with our state and federal regulators, we are making long-term investments in public health and safety.

This winter, following heavy rains, we detected trace amounts of the parasite Cryptosporidium in the Bull Run Watershed. As a result, the Oregon Health Authority revoked our limited-term treatment variance—the only variance granted to an open-source water system in the country. Council is considering a number of options.

We are also working with our regulators to reduce exposure to lead. While our source water and distribution pipes are lead-free, our water passes through bad plumbing fixtures in some “high-risk” homes. We are planning to adjust the pH of our water to make it less corrosive.

By strengthening accountability and transparency in government, we build public trust.

I strongly supported Measure 26-189, sponsored by Auditor Mary Hull Caballero. It increases the independence of the elected City Auditor and passed overwhelmingly in the May election.

We ask a lot of our citizen boards and commissions, and count on them for good advice. But too often we do not give them the tools to be successful. That’s why I am leading a reform effort, including mandatory disclosure of conflicts of interest and robust training to support these community volunteers.

When bad actors in the so-called “sharing economy” refuse to play by the rules, I have been standing up for consumers.

I sponsored Measure 26-194 in the May election. It passed with 62% of the vote, and authorizes the Council require internet companies like HomeAway to pay the lodging tax so everyone is taxed fairly.

Commissioner Saltzman and I demanded that Uber turn over information about their use of technology to evade regulators. When they failed to do so, the Council issued a subpoena for the documents.

And because we have a duty to ensure that guests are safe, I am also working with the City Attorney to require companies like Airbnb to disclose the names and addresses of their hosts.

I serve as Council liaison to Venture Portland, the umbrella organization for our 50 neighborhood business districts.

This year’s budget continues funding for a successful program we launched to strengthen local small businesses in East and North Portland.

And I worked with local business leaders on important issues in our community, holding roundtable discussions with neighborhood business leaders, launching the “All-User Challenge,” and – after the winter storms hammered our local small businesses – writing an essay to encourage people to show the love and shop local on Valentine’s Day.

I’m passionate about arts and culture, and proud to serve as Council liaison to the Regional Arts and Culture Council (RACC). Here are a few highlights:

• Executive Director Eloise Damrosch announced her retirement, after 30 years of exemplary service to our community.

• Over 30,000 kids benefit from the Arts Tax. The Oregon Supreme Court heard arguments on the sixth and final legal challenge; a decision is expected later this year.

• The Mayor and I requested a performance audit of RACC – the first in its history.

• Council celebrated the 25th anniversary of Crow’s Shadow Institute of the Arts, a leading center for Native American art.

• And the community celebrated the sixth and final season of Grimm with a tree planting in Pier Park.

This year, Mayor Wheeler asked me to serve as liaison to the Rose Festival, the City’s official festival.

We executed an official agreement with the Rose Festival, and secured a $100,000 grant to support their work. Commissioner Chloe Eudaly, the 82nd Avenue of Roses Parade Committee, and I participated in the Starlight Parade.

New Faces on the Fish Team

We welcomed a number of new staff members, and said thank you to others.

Amira Streeter and Todd Lofgren joined our team. Amira, a graduate of Lewis and Clark law school, will focus on Superfund, community development, and citywide policy issues. Todd, who previously worked for Parks, will serve as my liaison to both public utilities.

Jim Blackwood retired after nearly eight years of public service. He worked on many important initiatives, like new oversight bodies for our utilities. And Liam Frost transitioned to the Water Bureau, where he will work on priority projects like expanding the low-income discount program.

The decline in civility in the public square hit City Hall hard. We have witnessed frequent protests, disruptions, and threatening behavior. For some City Hall staffers, it has created a hostile work environment. I am proud of Asena Lawrence for speaking up, including in this piece by Amelia Templeton on OPB.

As always, I am honored to serve on your City Council.

Thank you for what you do to make Portland a better place.