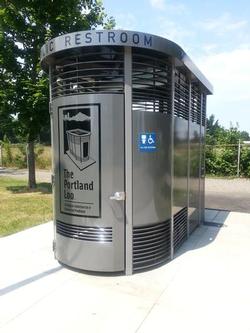 Thanks to funding from the voter-approved Parks Replacement Bond, a Portland Loo (permanent restroom) was installed in August 2018 to replace the portable toilet at Raymond Park. The Loo was installed near the splash pad and playground (Option A on map).

Raymond Park is located at SE 118th Avenue and Raymond Street. This park offers a wide range of activities, including a playground, splash pad, basketball court, and hosts a free summer lunch and play program for neighborhood children.

WHY INSTALL A LOO?

Portland Loos have already been installed in many Portland parks, including Waterfront Park, the South Park Blocks, the North Park Blocks, Khunamokwst Park, Wilkes Park, and Parklane Park. Made primarily of steel, they are a single-user restroom that is designed and manufactured in Portland to be safe, secure, and graffiti-resistant. Read more about their design and features here. Port-a-potties do temporarily fill the need for a public restroom, but they are frequently targets of vandalism in neighborhood parks.

While most of the downtown Loos are open 24/7, Loos in neighborhood parks such as Raymond Park can be locked and open only during park hours. When open for use, they are typically unlocked every morning by Parks maintenance staff, cleaned and stocked, and locked in the evenings.