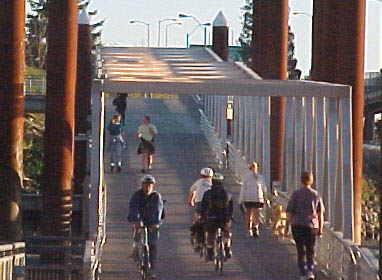 Portland has been successful in making bicycle ridership a part of daily life in Portland. That statement is taken directly from Portland’s Comprehensive Plan . It is a core element of our bicycle policies. Over the past 14+ years we have worked hard to make bicycling more convenient, comfortable, and accessible to more people throughout Portland and we have been successful.

How do we measure success?  Our new Portland Bicycle Plan for 2030 calls for more than a quarter of all trips to be made by bicycling by 2030.

While we don’t have the ability to accurately measure bicycle mode share* for all trips, we do have a number of indicators showing that bicycle use is increasing as conditions improve for biking. Among the more important indicators are the regular bicycle counts we’ve conducted at locations throughout the city. The most significant locations are at the city’s four main bicycle-friendly bridges: the Broadway, Steel, Burnside & Hawthorne. These are the bridges with bicycle facilities on them, and generally leading to them. Bicycle use on these four bridges has grown 322% since 1991, while automotive trips have not increased at all

*Mode share is the percentage of all trips—not just commute trips—taken using a particular mode of transportation.

The 2018 summer bike count is over. Thank you to all our volunteers!

Gearing up for the 2019 bike count? Click the 'Summer Bike Count' link below for more information!

Data and analysis of the 2012 Portland bicycle count.

Data and analysis of the 2011 Portland bicycle count.

Data and analysis of the 2010 Portland bicycle count.

Read a summary of the results of the 2009 Portland Bicycle Counts here.

Data and analysis of the 2008 Portland bicycle count.

This simple concept is an important element in our efforts to plan to capture the next wave of potential cyclists in Portland.

Portland's Office of Transportation has researched, counted, and recorded information about bicycling in Portland. Click here to find all manner of data and graphs related to bicycle use in Portland.

A map of past bicycle count locations