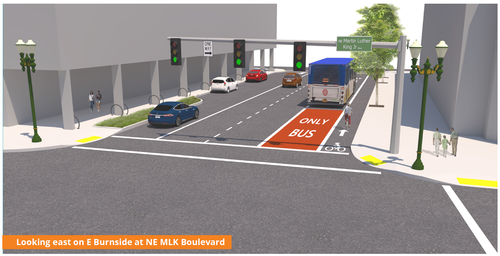 Burnside was established as the city’s east-west axis in 1912. A critical street ever since, the Portland Bureau of Transportation (PBOT) is working to make Burnside more efficient, allowing it to carry more people as the city grows. To this end, PBOT will install a Business Access and Transit (BAT) lane. This bus lane will extend the lane added to the Burnside Bridge in November of 2019 out to 12th Avenue on the eastside, providing faster, more reliable TriMet service. Related signal upgrades will improve safety and accessibility on East Burnside and MLK for people crossing the street or bicycling across the river. 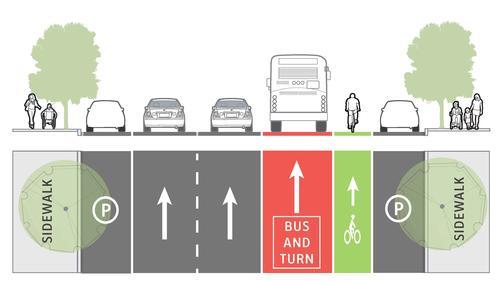 Business Access and Transit (BAT) lanes on Burnside will improve the speed and reliability of bus service without reducing access to local destinations. Transit priority BAT lanes will allow the buses to access and get through the Central Eastside, relieving a major pinch point in the transit system.

Better bike connections will make it safer and more intuitive to bike from downtown to the Central Eastside. This project will make it easier to connect with SE Ankeny, a low-traffic bikeway that runs parallel to E Burnside.

People moving capacity Changes in street design would increase the number of people that the street could accommodate by +145%.