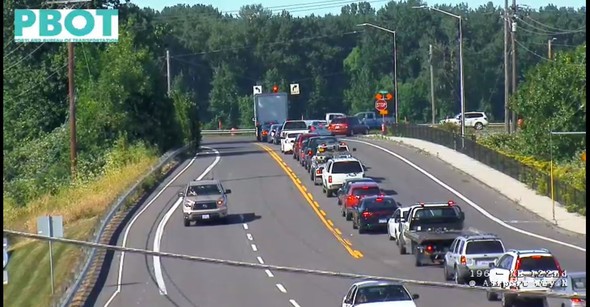 A common occurence on NE 122nd Avenue and Marine Drive, as viewed from a city traffic camera - traffic lined up at the stop sign as people driving wait for an opportunity to safely turn left onto NE Marine Drive - will be resolved with the installation of a new traffic signal at the intersection.

(July 10, 2019) Work has begun on a series of safety improvements at NE 122nd Avenue and Marine Drive, including a new traffic signal. The Portland Bureau of Transportation (PBOT) and Portland Parks & Recreation are partnering on the improvements, which will make the intersection safer and improve access to the nearby multiuse path.

Currently, the T-intersection at NE 122nd Avenue and Marine Drive has a stop sign with a flashing red light for traffic turning onto Marine Drive. Traffic on NE Marine Drive does not have to stop, often causing long backups during peak travel hours for people wanting to turn from 122nd. The new signal will help drivers on 122nd Avenue to turn onto Marine Drive. It will also include a protected left turn for people turning from westbound Marine Drive onto southbound 122nd Avenue. Additional features include a bike signal to help people on bikes cross Marine Drive from the southeast corner of the intersection, allowing them to connect to the westbound bike lane on Marine Drive. The traffic signal is located on a flood control levee for the Columbia River, so PBOT coordinated with Multnomah County Drainage District and obtained permits from U.S. Army Corps of Engineers.

“This traffic signal is an important step towards a safer Marine Drive and achieving our Vision Zero goals,” said Transportation Commissioner Chloe Eudaly. “I am thankful to our Parks & Recreation bureau partners for supporting this important infrastructure investment.”

From 2012 to 2016 on Marine Drive between NE 33rd and NE 185th avenues, there were 189 total crashes including 4 fatalities and 144 injuries. Since January 2017, six more fatalities have occurred along this segment. In May 2019, the speed limit on this stretch of road was reduced from 45 to 40 mph. There are fixed speed safety cameras located in two locations on the corridor – westbound near NE 138th Avenue and eastbound near NE 33rd Avenue.

“This critical safety investment has been a long time coming, we’re grateful to Portland Parks & Recreation for helping us obtain the funding for this new signal,” said Transportation Director Chris Warner. “The new intersection will be safer for everyone – whether they are walking, biking, or driving.”

With support from Portland Parks & Recreation, the project will also fill in gaps in the multiuse path adjacent to the road between NE 112th and NE 185th Avenues. The two-way multiuse path is part of the 40-Mile Loop.

“Thanks to our PBOT partners for working with Parks on improvements to the Marine Drive path,” says Portland Parks Commissioner Nick Fish. “The new trail will be safer and easier to access for all users.”

Project funding comes from $1,077,000 through a Regional Flexible Funds Grant from the federal government obtained by Portland Parks & Recreation and administered through Metro. Other project funding includes $589,000 in Parks System Development Charges (SDCs) and $50,000 from the Portland Bureau of Transportation (PBOT)’s Vision Zero. Portland Parks & Recreation obtained the grant and did preliminary design work with PBOT finishing out the project for the City.

“Portland Parks & Recreation is proud to have secured the grant for substantial work on the Marine Drive Trail project,” says PP&R Director Adena Long. “Better safety and increased accessibility will help all trail users, and we look forward to the project’s completion.”

Parks System Development Charges (SDCs) are one-time fees assessed on new development to cover a portion of the cost of providing specific types of public infrastructure required as a result of this development. Park SDCs help ensure that Portland's quality of life keeps pace with our growing and changing city by providing additional parks and recreation facilities needed to accommodate growth.

Construction will be ongoing through the summer with all elements scheduled for completion by the end of 2019. For more information, visit https://www.portlandoregon.gov/transportation/59283.