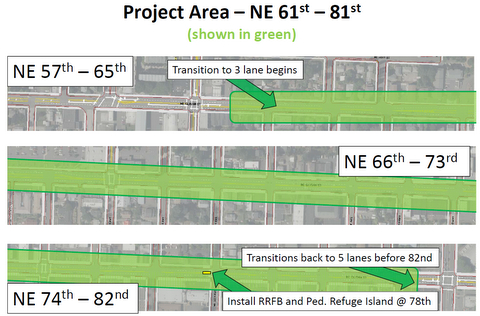 The Bureau of Transportation (PBOT) led a public meeting with the support of the Portland Police to discuss potential safety improvements on NE Glisan. Everyone who had contacted the City regarding the January 2013 crash was invited. The meeting was well attended. Those present expressed significant concern about safety on NE Glisan, including concerns about speeding and the safety of pedestrians crossing the street. Many voiced specific concerns regarding the crossing at 78th. You can view the Transportation Bureau’s presentation at this meeting below.

Second public meeting to discuss strategies to improve safety on NE Glisan between NE 60th and 82nd Avenues. 4,000+ residents near the project area were notified. Staff from the Bureau of Transportation shared data about traffic flow, parking demand, and pedestrian travel in the corridor at the meeting. Transportation staff presented a safety strategy for public feedback involving modernizing NE Glisan from 60th - 80th into a 3-lane roadway with a travel lane in each direction and a center turn lane. The proposal involves converting the current pro-time parking (no parking during the peak hours) on NE Glisan to full time parking. Finally, Transportation staff proposed a crossing improvement at NE Glisan and 78th including a pedestrian refuge island and a Rapid Flash Beacon. There was overwhelming consensus from those present that the project move forward as proposed. You can view the Transportation Bureau’s presentation at this meeting below.  The NE Glisan Safety Project is now slated for late summer/early fall construction.

If you have questions about this project, please contact Kyle Chisek at 503-823-7041