First one up...El Paso, TX.  This city had their first ciclovia, named Scenic Sundays, in 2007. It started out as a single event, for which the city’s Parks and Recreation 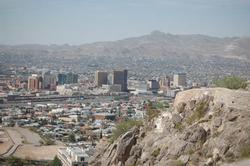 Department closed down 2.5 scenic miles on either side of the mountain. The event was such a success that in 2008 they had 10 events, and in 2009 the city decided that they would close Scenic Drive every Sunday for six hours to have it open to bikers, walkers, joggers and skaters. The average turnout in the summer is about 3,000 – 4,000 people. In the winter months they only see a few hundred people.

We love El Paso’s commitment to and enthusiasm for open roadways for people to get out and be active. We also commend everyone who goes up the mountain every Sunday.

Every city is different - down in El Paso they simply close a single road to cars and open it for people. No vendors, no entertainment, no food, just simple fun and breath taking views.