(December 10, 2015) What is the best strategy for being seen and staying safe while out and about during a Portland winter? Invest some time or money in high visibility gear or clothing.

High visibility gear and clothing is made of fluorescent colors with added reflective tape or designs. To best be seen in all conditions - during the day, at dusk and at night - you should be wearing both fluorescent and reflective items. 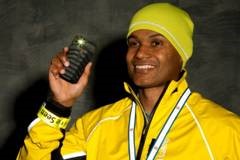 Wear something fluorescent to be most visible during the daytime. Fluorescent materials appear bright during the day and even brighter near dusk, but are less effective for nighttime use.

It has to do with optics theory and physics, but fluorescent colors look really bright because of the way they absorb and emit different kinds of light. Lots of colors can be fluorescent but the yellow and orange clothing worn by road crews and emergency personnel as well as some green and pink colors are the most popular and effective.

During the daylight hours the sun’s ultraviolet rays react with the fluorescent colors to make them appear to glow, or fluoresce, and this effect is even stronger in poor light conditions such as in rain, fog or toward dusk, which are typical Portland winter conditions.

Wear something reflective to be the most visible at nighttime. After dark, the light from sources like car headlights bounces off reflective materials, actually making them glow, and reflects at least some of that light back to the source.

Since reflective materials work at night by bouncing back the light from a source, to work properly it needs to be dark and there must be a light source such as car headlights. These materials are not so effective during the daytime.

Up Your Visibility Game

What can you do if you don’t want to buy all new outerwear? If your rain gear is dark colored or even black, it’s a good idea to wear or carry something fluorescent on rainy days. Think a bright orange or yellow umbrella or even a safety sash or vest.

You can also add reflective tape to your regular clothing to be more visible at night. Reflective tapes and sew-on materials can be purchased online, at some craft or fabric stores, hardware stores, safety supply stores such as Sanderson’s Safety Supply, and even auto supply stores and bike shops.

The best place to add strips of reflective materials are around the joints or moving parts of the human form. Adding reflective bits of material to the ankles, knees, elbows and wrists will help the driver recognize you as a person on the move and send the message that they need to slow down. The main thing to remember is: Fluorescent for day, Reflective for night.