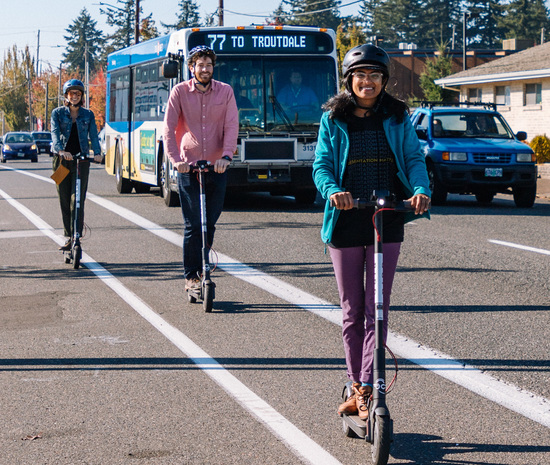 (Oct. 22, 2018) In the first major step of evaluating Portland’s e-scooter pilot program, PBOT surveyed nearly 75,000 customers of Bird, Lime and Skip, the three companies permitted to operate e-scooters in Portland. The wide-ranging survey asked customers about their riding habits, their perceptions of scooter safety and popularity and whether they replaced car trips with scooter rides. More than 4,500 people responded, and the results suggest scooters are a popular new transit option for Portlanders and visitors alike.

Among the key findings are:

PBOT’s evaluation of the e-scooter pilot is ongoing. Other components of the evaluation will include focus groups, rider behavior observations, trip data analysis, safety data analysis (including reported crashes), and analysis of feedback and complaints submitted through the project’s online form.

The City is also collecting trip data from the companies. As of October 11, 2018, 472,069 trips have been taken on e-scooters in Portland, with an average trip length of 1.2 miles.

The evaluation period will conclude with a Findings Report released shortly after the pilot ends on November 20. Beginning November 21, shared e-scooters will not be available in Portland as PBOT evaluates whether they will be a long-term part of Portland’s transportation system.

A summary of responses to all of the survey questions can be found online at: www.portlandoregon.gov/transportation/scootersurvey

More information about the scooter pilot, including an FAQ can be found at: www.portlandoregon.gov/transportation/e-scooter

Shared Electric Scooters, also known as e-scooters, are an emerging technology and shared mobility service. The first systems in the U.S. launched in 2017. Similar to bikeshare, the service provides personal transportation to rent for one-way trips. To begin a rental, companies typically require customers to download an app or text a number to unlock the device. To end a trip, customers park the scooter on the sidewalk close to the curb. The scooters are not locked to docks or stations or other objects such as bike racks or street signs.

Electric scooters are powered by an electric motor, and in Portland, companies are required to cap the maximum speed at 15 MPH.