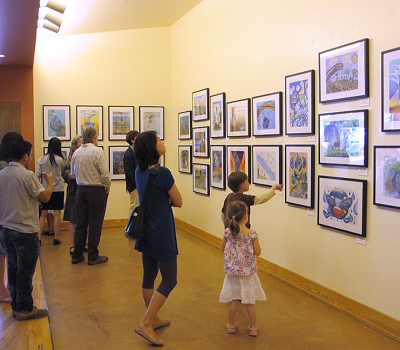 The 22nd annual United Nations Environment Programme International Children’s Painting Competition was held in 2013. The theme was “Water: The Source of Life” and over 750 entries were received from around North America.

The top 50 were on exhibit at the Portland State University Native American Student and Community Center (NASCC) through October 2013.

Download the exhibit guide to see the art that was on display.

The International Children’s Painting Competition on the Environment is organized every year by the United Nations Environment Programme (UNEP). It has been held since 1991 and has received more than three million entries from children in over 150 countries.

Theme - Water: Where does it come from?

Everything that you can define as life happens because of the actions of protein in water. Because without any water; plants, animals and humans will die. Water supports the plants grow so that we could breathe in oxygen and eat food. Water supports animals to survive. Without water, there will be no life on earth.

The planet’s oceans, rivers, lakes and other bodies of water provide homes to countless species of plants and animals. Water supports life in many other ways as well. We use water every day in farming and agriculture, manufacturing, transportation and also power generation. In addition, water plays an important role in regulating the earth’s temperature for human survival.

Water is the source of all life on earth. We all share the responsibility to ensure a healthy, secure and sustainable water supply for our communities, environment, and economy – our quality of life depends on it.

Despite the fact that water covers 71% of earth surface, very little of it is used by human beings. Water pollution affects drinking water, rivers, lakes and oceans all over the world. This consequently harms human and all other living things on earth.