2020 marks the 100-year anniversary of the ratification of the 19th Amendment,

giving women throughout the U.S. the constitutional right to vote.  Oregon’s women gained that right eight years earlier in 1912.  Women’s suffrage was voted on five times in Oregon before it passed the sixth and final time.

To celebrate the ratification of the federal amendment, the City of Portland Archives is highlighting Women in Portland in our new exhibit. We are focusing on ten women who have worked for the City or in the larger Portland community. Some are well known and others concealed by history, but all have contributed to the story of Portland. We found many i 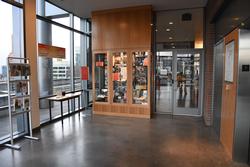 mages of women in our collection that remain largely nameless and we have included them too as a backdrop to our exhibit.

The exhibit features ten women who represent the important and diverse roles women played in Portland’s past. For some of these women we have extensive records. For others, their story has been patched together from pieces of information in documents, photographs and newspaper accounts. All of them have some connection to the City of Portland, whether they worked for the City, were surveilled by the police, were part of an urban renewal committee, or simply active in their community. These women’s stories are stories of Portland.

Drop by our office at 1800 SW 6th Ave to see the exhibit or see a smaller version of it in City Hall. Make sure you pick up one of the exhibit bookmarks; each one highlights one of the 10 women we have featured.