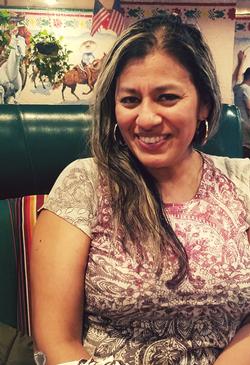 Zuleyma Figueroa is a Utility Worker I in the Bureau of Transportation. She joined WE Lead in June 2019.

Originally from Central America, Zuleyma emigrated from El Salvador to the United States at age 15. Her language skills include both English and Spanish. She attended Tigard High School before starting at Portland Community College, and then Portland State University. She worked as a Portland Public Schools teacher for 15 years before starting her career in trades. After learning electrical, carpentry, and facility maintenance skills in trade school, she worked as a hazmat technician cleaning spills of chemicals and biohazards. Zuleyma performed seasonal work for PBOT before starting as a full-time Utility Worker.

In her current role, Zuleyma maintains streetcar platforms and cabs, and ensures a clean environment on and around the streetcar lines. She truly enjoys helping community members get around the city using the Portland Streetcar.  Zuleyma joined WE Lead to learn from other women in the City of Portland and build on her leadership skills and experience.

Outside of work, Zuleyma enjoys running, traveling, and spending time with her family in the outdoors. At home, she has a tabby cat named Snoopy.