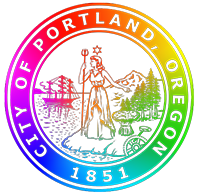 Other Virtual Events (Not local):

Toronto Pride began back in 1981, and it's become one of the most popular Pride events in the world. Unsurprisingly, they've built a robust slate of online events to make up for not having a physical Pride celebration. Events celebrating the Latinx and Black queer communities, as well as the famous Dyke Rally are all taking place online, along with a cabaret and a drag ball. Plus, each Saturday of Pride Month will include events as part of Stay Home Saturdays. These include a slew of virtual parties like Bi or Bye, a Toronto staple since 2018 that focuses on making space in nightlife for the comfort and safety of queer and trans women of color. Get More Info Here

Global Pride. Pride organizations from around the world are uniting for Global Pride 2020, a 24-hour livestream that "reflects and celebrates the beautiful diversity of LGBTI+ people everywhere." Announcements of major acts involved are still forthcoming, but with the involvement of InterPride and the European Pride Organizers Association, it's expected to be a massive, star-studded celebration. Get More Info Here

Washington DC. In lieu of the traditional Pride events, Capital Pride is celebrating Pride virtually all month long. One of the most innovative of Capital Pride’s programming is the first-ever Pridemobile Rainbow Blast, where on June 13 the Pridemobile will drive around the city to document how residents are showing they have pride and entertain the neighborhoods with beats from local DJs and performances from local drag performers. As for the online programming, Capital Pride will produce a web series called Pride in the City. Available on Facebook and YouTube, the series will introduce viewers to important people and places in the nation’s capital. The first episode, which airs June 14, will celebrate the diverse and unique talent Washington, D.C. has to offer. They will also offer a Sunset Dance Party the same day at 8pm and Pride Talks with leaders from LGBTQ organizations streamed live on social media. For more information, visit capitalpride.org.

This interactive Pride kick-off party is raising funds for New Alternatives, an organization supporting homeless LGBTQ+ youth. Directed and hosted by acclaimed choreographer Matthew Johnson Harris, who has produced several benefit concerts, the virtual show will include The Unbreakable Kimmy Schmidt's Tituss Burgess, Glee's Alex Newell, and Jagged Little Pill's Lauren Patten, among many others. New Alternatives offers a litany of services from assisting with meals and hygiene to training young people in HIV prevention and conflict resolution, to educational tutoring for SATs and college applications. Get More Info Here

Raise your voice: Voices of Pride offers a virtual benefit concert, produced in partnership with the New York City Dyke March and the Reclaim Pride Coalition. Organizers have urged participants to remember the roots of pride parades: riots and protests. Accordingly, the event raises funds for the Emergency Release fund, an organization working for the release of transgender and queer New Yorkers from city jails where COVID-19 cases have skyrocketed. Representatives from the Dyke March and Reclaim Pride Coalition will offer tips about online organizing and social justice activism within the queer community. And the concert itself boasts an eclectic lineup featuring folk-rocker Blair Medina Baldwin, singer-songwriter Cheeyang Ng, and many, many more. eventbrite.com.

Southern style: Make it a Sunday with this digital drag brunch. Hosted by Birmingham, Ala.-based drag queen, actor, and makeup artist Sharon Cocx, the event features performers from the area like witch and “Diva of the Damned” Reese Eve Cocx and “The Woodland Glamazon of Birmingham” Fawn Dell Wood to name a few. $10, eventbrite.com.

History in heels: Meanwhile, the organizers of Indy Pride host a fireside chat with drag performers dropping a little history on their art form in relation to Pride. eventbrite.com

Boston Pride Lights. A staple of Boston Pride, the hanging of lights in Blackstone Park honors those who died during the HIV/AIDS epidemic in the 1980s and 1990s. This year, the lighting will be live-streamed, and also include Franklin Sq. Park as well. Other Boston Pride events will include a digital panel with LGBTQ military veterans, the Dancing Queerly Virtual Festival, and a cooking demonstration with Chef Jonil Casado. Get More Info Here

The Women of Pride Panel. Part of Charlotte Pride, this event will feature women leaders from a variety of Pride organizations in conversation. Charlotte Pride will also include a digital Stonewall commemoration and a discussion of LGBTQ+ rights in North Carolina called "Pride Across Carolina." Get More Info Here

LGBTQ Digital Pride and Migration 2020: Taking place on World Refugee Day, (June 20 at 1 p.m. ET) and organized by the RDJ Refugee Shelter, a New York shelter for homeless refugees and asylum seekers, this gathering will celebrate "the large pool of displaced people who identify as LGBTQ." RDJ is working alongside organizations like the Black LGBTQ Migrant Project, Brooklyn Community Pride Center, and AsylumConnect, to ensure an event that will represent the geographic diversity of the LGBTQ+ community. Attendees will include Marti G. Cummings, Kiki Lucia, along with musician Trevor Bachman. Get More Info Here

The Chicago Pride Fest will mark its 20th anniversary with a two-day livestreamed festival on June 20 and 21 from 7–9pm that will celebrate “the love, life, and diversity of Chicago’s LGBTQ community,” according to its organizer, the Northalsted Business Alliance. The event, which will stream via Twitch, will include a lineup of entertainment, activism, and special greetings. The festival will also act as a fundraiser for community outreach. Specific programming will be announced later this month at pridefestchicago.com and virtualchicagopride.com.

Cincinnati's Black Pride celebration has already announced a diverse slate of online events, including the third year of the Black Alphabet Film Festival, which features work by and documenting the diversity of the Black LGBTQ+ experience, taking place on June 25. The Vizazi Torch Awards, which honor Cincinnati residents working to improve the lives of queer and trans Black people in the city, will be held digitally on June 26. There will also be virtual parties all weekend long, with DJs spinning everything from underground house to '60s classics and African dance music. Get More Info Here

Big on banjo: Porch Pride: A Queer-antine Festival showcases queer roots musicians with 10-plus hours of livestreaming. Organized by San Francisco-based Bluegrass Pride, the event raises funds for LGBTQ bluegrass musicians who are unable to perform (and therefore unable to earn an income) due to venue closures and show cancellations. June 27-28, bluegrasspride.net

San Francisco Pride will be ditching a traditional, in-person Pride for a two-day online extravaganza. The Online Celebration and Rally will occur on Saturday, June 27 from 1–9 pm and Sun, June 28 from 2–7 pm. Little information has been revealed about the event, but you can expect live and pre-recorded performances; greetings from LGBTQ community members, elected officials, and celebrities; speeches from thought leaders; drag and dance performances; DJ sets; and more. Learn more at sfpride.org.

New York is still pulling out all the stops for its Pride celebration, recruiting superstar singer Janelle Monaé and Schitt's Creek creator Dan Levy as two of the four marshals for the celebration taking place on June 28. The event will be streaming on ABC News Live from noon to 2 p.m. EST and on WABC Channel 7. Billy Porter, Miss Richfield 1981, and Deborah Cox will all also participate in the celebration. Get More Info Here