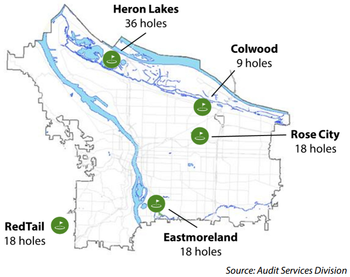 Portland Parks and Recreation should present alternatives to City Council to determine the future direction of the golf program and improve its contract management, according to an audit released May 23, 2019.

Intended to be self-supporting, the golf program required an infusion of $800,000 of taxpayer funds in 2017 to remain solvent. While Parks has taken steps to cut costs and increase the number of golfers, it is fighting a national trend of a sport in decline and past ineffective program management.
Many of the factors that led to the funding shortfall in 2017 remain in place.

Response from Portland Parks and Recreation is included in the report.

The City should improve the transparency and accountability of its recreational cannabis tax revenue, according to an audit released May 2, 2019, by City Auditor Mary Hull Caballero.

Oregon voters legalized the possession and sale of recreational cannabis in November 2014, and in November 2016, Portland voters approved a 3 percent local sales tax. The ballot measure specified the tax revenue should be used in three categories, drug and alcohol programs, public safety, and support for small businesses.

The categories are intentionally broad, to meet changing community needs. The tax was promoted as funds that would benefit and support individuals and cannabis businesses owners that were adversely impacted when cannabis was illegal. Council established expectations that community members would be involved in allocation decisions, and there would be a link between the source and use of the tax.

Since that time, most of the taxes collected have been used for police and transportation programs. While the uses are allowed under the ballot measure, community members, cannabis businesses, or others impacted by past cannabis policies have not been involved in the budget decisions, and the City has not reported on how it’s used the tax revenues.

The audit recommends the City improve the transparency of tax allocation decisions and results and ensure an effective distribution of cannabis grants. Response from Commissioner Eudaly and the Office of Community & Civic Life is included in the report.

Find a one-page summary here and the full report here. 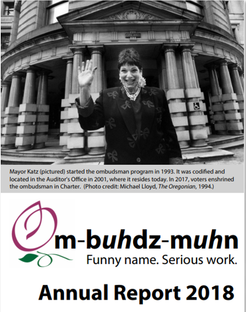 This year our cover is a playful tribute to the late Mayor Vera Katz, who started the ombudsman program in her office in 1993. In the quarter century since, the ombudsman program has gradually gained more authority, access and structural independence, culminating with voters enshrining it in City Charter in 2017.

With our independence secured, we continued watch-dogging City bureaus on behalf of the public in 2018. Demand for our services has grown in each of the last four years, but we know there are many community members still unaware of the service we provide. We are currently developing a new outreach plan to increase awareness of use of our services, particularly by Portland’s historically underserved communities.

More than 20 percent of complaints in 2018 were about the Bureau of Transportation, and ranged from concerns about development charges, car camping and sidewalk repair. We worked to resolve the problems community members raised through information, facilitation and investigation. We sometimes had occasion to make recommendations for a bureau to take corrective action or change policy. Bureaus accepted nearly all of our recommendations in 2018, and financial savings to complainants topped $156,000. To see how we resolved specific cases check out our case examples page here.

We are seeking a skilled manager with law enforcement accountability expertise to lead Independent Police Review, the division in the Auditor’s Office responsible for receiving, investigating, and resolving community complaints involving the conduct of Portland Police Bureau members.

The IPR Director reports to the City Auditor, who is independent of the Mayor, Commissioners, Police Bureau, and other city managers. As an elected official, the Auditor is accountable only to the public. This structure is critical to ensuring IPR’s ability to conduct independent and objective investigations of alleged police misconduct, conduct policy reviews of police practices, and report data on investigation and policing outcomes.

IPR was created in 2001 to provide professional civilian oversight of investigations into allegations of police misconduct. Since then, the office has grown in response to expanded responsibilities for independent investigations and U.S. Department of Justice settlement agreement requirements. IPR is the primary intake location for complaints and commendations. It shares investigative duties with the Police Bureau’s Internal Affairs Division, focusing its resources on complaints involving high-ranking officers and those filed by members of vulnerable populations. IPR recently received additional resources to increase the frequency of its policy analyses of police practices and make data more publicly accessible.

The IPR Director oversees a staff of 15, including managers, investigators, analysts, support personnel, and a community outreach specialist. The Director is responsible for managing the division’s employees, budget, and strategic initiatives and serves on the Auditor’s management team.

Find more information about the position and directions to apply here.

Among its many quirks, the commission-form-of government puts the Auditor’s Office in a jam at budget-setting time.

The issue is structural. Commissioners have executive responsibilities to run bureaus as well as sit as policy makers in City Council, including making budget decisions. As the sixth elected official in City government, the Auditor audits and investigates commissioners in their executive role. Then those same people decided the level of resources the Auditor gets in any given year and how the Auditor may use them.

I proposed a framework to ensure the City Council can meet its fiduciary responsibilities while the Auditor’s Office receives a predictable level of funding to do its work on behalf of the public. The City is hosting several events for public testimony on the budget and taking written comments online. The Mayor’s Proposed Budget is scheduled to be announced May 1.

You can watch my presentation and the Council's reaction here.

You can read my presentation here.