During a meeting last week to discuss the Auditor’s Office budget, Mayor Hales posed a question: What is the relevancy of the Ombudsman’s Office? 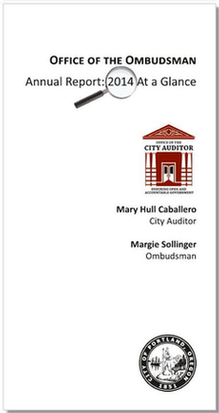 The question surprised me because of the essential role the Ombudsman plays in promoting transparent and accountable government.

Others in the City knew of these incidents and occurrences, but it was the Ombudsman who acted. The Auditor’s Office is the only function in City government whose sole responsibility is to hold the City accountable.

There is no more important contribution to transparent and accountable government than eliminating fraud, inequity, injustice and conflicts-of-interest. That, Mayor Hales, is why the Ombudsman’s Office is relevant and cost-effective. It’s also why I added staff to help sort out the hundreds of complaints it receives each year. There's more information in the 2014 annual report (click on cover) and the 2015 report will be out soon.