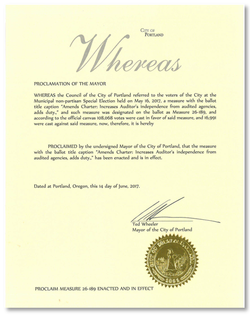 Charter changes to increase the independence of the City Auditor -- embraced by 86.42% of the electorate – are in effect. Mayor Ted Wheeler accepted the election result June 14, 2017, and issued a proclamation on behalf of City Council.

The changes enable the Auditor’s Office to make its own decisions about human resources and procurement as well as obtain independent legal advice. Before the Charter change, City bureaus that were the subject of audits and investigations were in control of those decisions. The changes also authorize the Auditor to submit budget requests directly to City Council for consideration without a review by the City Budget Office.

The new Charter requires the Auditor’s Office to have adequate internal controls, comply with all applicable laws, operate efficiently, and periodically undergo reviews by outside entities. It also incorporates the role of the City Ombudsman, which previously had existed only in City Code. Implementation of the Charter provisions is underway.