We audited the Gang Enforcement Team’s effectiveness over the last year and captured our findings and recommendations in two reports.

One report focused on the Gang Enforcement Team’s use of minor traffic infractions to stop cars that officers suspected of carrying gang members. We found the team could not demonstrate that the stops were effective in deterring gang crime while the tactic chipped away at community trust when African American drivers not involved in gang crime got stopped.

The second report reviewed tactics used by the Gang Enforcement Team members who investigate suspected gang crimes. The Police Bureau used a variety of sources to develop lists of people they determined to be active gang members and those associated with them. The Gang Enforcement Team announced in September that it would stop using one type of list, but did not disclose its continued use of another list. We found the list still in use needs policy constraints and legal review to ensure civil liberties are protected and the risk for abuses and errors is addressed.

You will find the reports and associated videos by clicking on the links below. I hope they contribute to your understanding of gang enforcement tactics and the disproportionate burden they place on Portland’s African American residents. I am pleased that both Mayor Wheeler and Chief Outlaw accepted the recommendations and committed to implementing them. We will check back in a year to assess their progress. 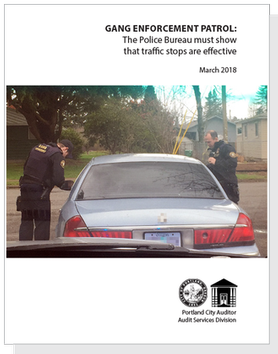 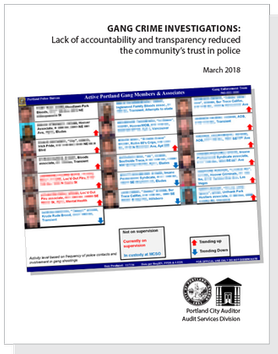