Have you ever wondered if promises made to voters are delivered when a program funded by them is up and running? It's an important question, and we have some answers. 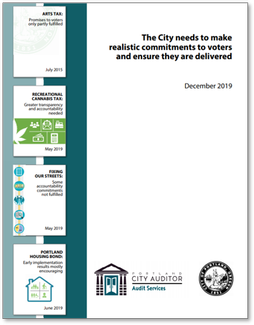 Over the course of four audits of voter-approved spending, we noticed a trend that the City was not meeting its accountability promises, even when the use of the funding generally met expectations. Some examples:

• Oversight committees: The City promised voters that a committee would be convened to monitor gas-tax spending, but did not give the group current, consistent, and accurate information from which to provide meaningful oversight.

• Annual reports: The City promised annual public reports, which implies the release of a report each year. There was no report for cannabis, and those for the housing bond and gas tax were late.

• Annual audits: Despite its promises, the City only delivered a review of the housing bond.

• Administrative caps: After voters approved the arts tax, the City declared the promised cap on administrative expenses was unrealistic, and City Council repealed it.

The latest audit recommends that before measures are referred to the ballot, City Council should ensure that accountability promises are specific, feasible, measurable, and achievable. It should also specify a position or body responsible for making sure they are implemented.

Find the full report here and a one-page summary here.

View the four recent audits referred to in the report:

Fixing Our Streets: Some accountability commitments not fulled (May 2019)