Riding down Foster Road through the Lents neighborhood last month, I went past small businesses in old buildings, food carts, and newly built mid-rises with affordable apartments, but also abandoned lots and homes overdue for a fresh coat of paint.

The City has invested $207 million in urban renewal money since 2000 in Lents to improve the economy, housing, and infrastructure. These investments were managed by Prosper Portland and the Housing Bureau.

We spoke with Lents neighbors and stakeholders and went to community events to learn more about what people think and what they want from the City’s urban renewal investments. Many people asked for more data and more information on the urban renewal investments – how many jobs were created, how many housing units built, how’s affordability now, where did the money go?

While our audit found that the Housing Bureau had regularly reported on new housing unit construction and affordability, Prosper Portland’s reporting fell short. The economic development agency talked about key projects and created plans, but we did not see an assessment of how these investments have changed the Lents economy. 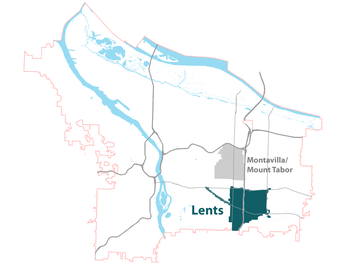 Our audit tries to bridge this information gap. We compiled spending data and indicators for the economy, housing market, and land use in Lents. We lined these up with the City’s ambitious goals and compared Lents to Montavilla/Mount Tabor – an area that did not receive urban renewal investments. This comparison lets us distinguish what may have been specific to Lents urban renewal from broader trends in the big economy.

Property values shot up in Lents, but not as much as in the comparison area.

Housing affordability is still a problem in Lents. Three out of five renters in Lents were burdened by housing costs – measured as spending more than 30 percent of income on housing.

There are more jobs in Lents now and job growth outpaced the comparison area.

You can view the data and findings in our audit report. If you would like us to present the audit report to your community group or if you have more questions/ideas for Lents, please get in touch! Printed copies of our report are available by request and at our City Hall office.