The City’s Portland Harbor Program focused its efforts in 2019 on setting the stage for the next phase of the cleanup, remedy design.

This is the stage where engineers figure out how to implement EPA’s cleanup plan. Here are just a few of the ways the City worked with our partners to pave the way for this foundational step:

We are proud to share the City’s 2019 Portland Harbor Program milestones. We thank our public, private, and community partners for helping make 2019 such a successful year and we look forward to more collaboration and progress in 2020.

The Portland Harbor Superfund Site in Portland, Oregon is located in the lower Willamette River, just south of the Columbia Slough (river mile 1.9) and north of the Broadway Bridge (river mile 11.8). Portland Harbor has a long history of shipping, industrial, and commercial activity because of its key location on the Willamette River. This area of the river also has historical, natural and cultural resource significance. 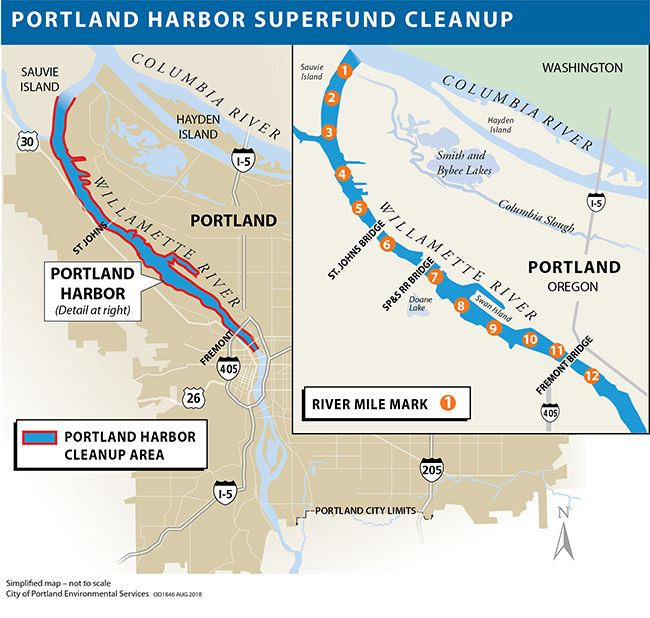 A joint U.S. Environmental Protection Agency (EPA) and Oregon Department of Environmental Quality (DEQ) study in 1997 showed that river sediments in Portland Harbor are contaminated with DDT and other pesticides, polychlorinated biphenyls (PCBs), and petroleum. Based on this information, EPA designated Portland Harbor as a Superfund Site in December 2000.

This is an unusually complicated Superfund site, one of the most complex in the EPA Superfund program. The site:

The EPA on January 6, 2017 issued its final cleanup plan. See the City's response.

We are accepting applications until Monday, Dec. 2 by 5:00 PM

How to learn more about the Portland Harbor Superfund site

The State of Oregon and the City of Portland propose a new partnership for a safer, cleaner Willamette River

What Do We Know about the Portland Harbor Superfund Site?

What We’ve Done in Portland Harbor