This past May, the City of Portland's Bureau of Environmental Services (BES) circulated proposed permanent administrative rules governing the use of cured-in-place pipe (CIPP) lining technology to repair privately owned and/or privately maintained sewer lines and laterals within the public right of way in the City of Portland. The bureau received one public comment and incorporated responsive revisions into the final rules that were adopted by the Director and took effect on June 27, 2017. The substantive requirements of the final, permanent rules are very similar to those of the temporary rules that they replaced; however, the permanent rules contain new provisions to help ensure compliance with the rules’ substantive requirements. The permanent rules adopted on June 27, 2017, can be found at https://www.portlandoregon.gov/bes/article/647249. 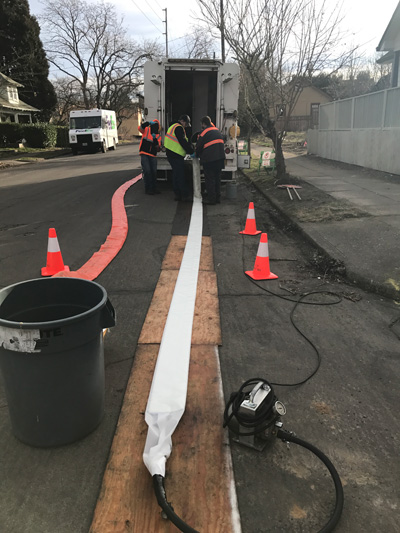 CIPP lining technology is a pipe rehabilitation method that involves inserting a flexible liner into the existing failing pipe and curing the liner with either water or steam. The result is a rigid, smooth surface that seals cracks and restores the old pipe to near-new condition. The chief advantage of using CIPP lining technology is its “trench-less” nature. CIPP lining allows installers to reduce and sometimes avoid the need to excavate and replace sidewalks, curbs, trees, utilities, and other features, making CIPP less disruptive to the community and more sustainable than traditional open-trench methods.

The adopted permanent rules replaced temporary rules. Those temporary rules, adopted in late 2014, authorized a pilot program that allowed CIPP technology to be used by qualified contractors working for private property owners to repair privately owned or maintained sewer lines and laterals in the public right of way. Through the rulemaking to adopt the new, permanent rules, BES primarily aimed to provide the public with greater clarity on program implementation and requirements. The new rules also include provisions to help ensure compliance with the substantive requirements of the rules.

ENB-4.33 - Administrative Rules for Use of CIPP Lining in Privately Maintained Pipe in the Public Right of Way