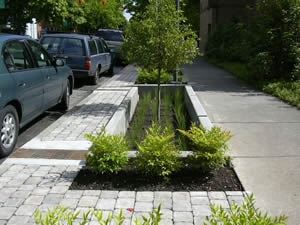 The SW 12th Avenue Green Street at SW 12th and Montgomery on the Portland State University campus contains a series of landscaped stormwater planters that capture and infiltrate about 8,000 square feet of street runoff.

Built in summer 2005, this street retrofit project demonstrates how to design both new and existing streets in downtown or highly urbanized areas that have direct environmental benefits and are aesthetically integrated into the urban streetscape. 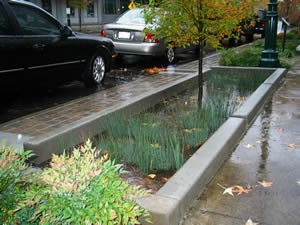 A 12-inch curb cut channels the street runoff into the first stormwater planter. Inside the planter, the water collects until it reaches a depth of six inches. The landscape system within each planter allows the water to infiltrate into the ground soil at a rate of four inches per hour.

If a rain event is intense enough, water will exit through the planter’s second curb cut, flow back out into the street and eventually enter the next downstream stormwater planter. Depending on how intense the storm is, runoff will continue flowing downhill from planter to planter until all the planters are at capacity. If they all exceed capacity, the water exits the last planter and enters the storm sewer. 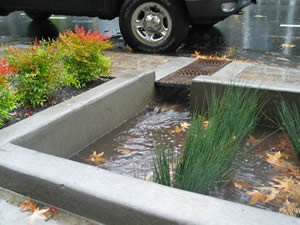 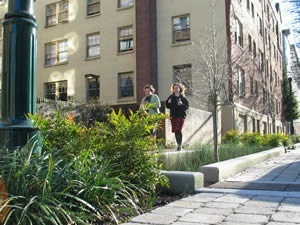 A three-foot wide parking egress zone allows people to reach their vehicles without competing with the stormwater planters. Perpendicular pathways between each planter shorten the distance between the sidewalk and parked cars.

A four-inch curb exposure at each planter indicates to the pedestrian that there is a drop in grade. Each curb cut that allows the street runoff to enter the stormwater planters has an ADA accessible grate to allow for unencumbered pedestrian flow along the parking egress zone.