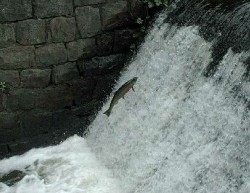 Fish communities in Johnson Creek include both native and non-native species.  Most of the native species present are those tolerant of warm water and disturbed conditions. These include red-sided shiners, sculpin, suckers, and speckled dace.  Historically large  populations of salmon inhabited Johnson Creek. Numbers declined dramatically once urbanization began and particularly after the channelization work was completed.

Winter-run adult steelhead return to spawn in Johnson Creek from mid-November through May. Two separate runs appear to peak in January-February and again in April-May. Eggs or salmon fry can be present in the gravel from December to July. Juvenile steelhead can remain in Johnson Creek for one to two years before migrating as smolts to salt water. Steelhead are likely to use the mainstem and tributaries.

Historically, coho salmon were observed in the lower reaches of Johnson Creek and Crystal Springs Creek from late September through early November. Eggs or coho fry could be within Johnson Creek gravels between October and March. Fry attempt to establish territories and remain in streams as juveniles for one to two years before smolts migrate to salt water.

Coastal subspecies of cutthroat trout are also present in Johnson Creek. This coastal subspecies has both sea-run and resident forms. No current documentation of the sea-run form exists. Data from 1992 and 1993 indicated that cutthroat trout were present in low numbers throughout the mainstem of Johnson Creek, but were more abundant in many of the smaller headwater tributaries. 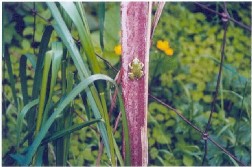 Sensitive species known to reside in the riparian areas of Johnson Creek include three salamander species (long-toed, northwestern, and Columbia), two frog species, and one toad species. Painted turtles have been identified in the upper watershed (east of 162nd Street). Other sensitive species have been sighted in the following specific areas: salamanders at 162nd and Kelley Creek; great horned owls, red-legged frogs, hawks, and coyotes at 182nd and Springwater Corridor; and tall bugbane, (listed as a sensitive species on the ODFW state sensitive species list) at Powell Butte.

Benthic macroinvertebrates are an important source of food for fish and other aquatic organisms. During 1999, Portland State University (Pan, et. al, 2001) conducted a pilot bio-assessment study of urban streams including Johnson Creek for Environmental Services. The main objective was to compare the differences of biota in two urban streams (Johnson and Tryon Creek) and two adjacent rural ecosystems (Clear Creek and Deep Creek). Of 65 sites sampled for physical, chemical, and biological 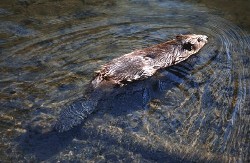 parameters during late August through early September 1999, 30 were in Johnson Creek, 25 of which were on the main stem. Sites were sampled monthly for diatoms, macroinvertebrates, and water chemistry. The results of the study found that benthic communities are degraded in comparison to regional reference creeks within the same ecoregion.  Specifically in Johnson Creek the results indicated marginal conditions for physical habitat, macroinvertebrates and lack of a quality food base.

Johnson Creek acts as a wildlife corridor for the passage of species not normally observed in large cities, including deer, coyote, bear, cougar, and many woodland and meadow birds.

A large or exhaustive database of information is not available on wildlife resources and their habitats throughout the Johnson Creek watershed. However, it is believed that the diversity of wildlife species in the watershed has been significantly reduced. Large mammals were once common, such as black bear, bobcat, cougar, wolf, fox, elk, and coyote. A cougar sighting was reported in 2003. Black-tailed deer and coyotes are likely the only large mammals still commonly found in or near the remaining forested areas. Birds are the most abundant wildlife forms living in urban and rural areas within the watershed and pileated woodpeckers have been observed in the Boring Lava Domes forest.