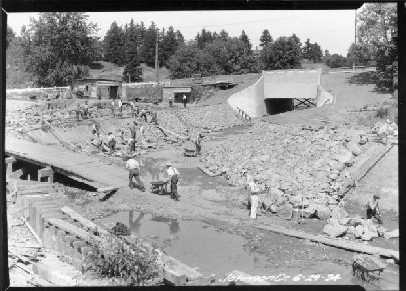 The floodplain of Johnson Creek is thought to be a remnant of large glacial floods that occurred about 15,000 years ago.  The ‘Missoula floods’ helped shape the Columbia River basin and the large, flat floodplain in the Lents area of the Johnson Creek watershed.  Native Americans traveled and set up summer camps throughout the watershed as they fished, hunted, and foraged for seasonally available foods.

Before urbanization, the Johnson Creek Watershed was a diverse area of upland and wetland forests with extensive vegetative growth.  As pioneers settled along the banks of Johnson Creek, large ancient trees were cut and sawmills were built.  Riparian vegetation was removed, and the wetlands along the lower segment of the creek were filled.  The middle floodplains were cleared for farming to take advantage of the fertile soil deposited by frequent floods.  By the 1920s, residential areas began to replace nurseries and farms, a trend that still continues.

In 1903, the Springwater Division Line, which ran alongside much of Johnson Creek, was developed for rail service.  In addition to passengers, the trains hauled farm produce to Portland markets.  Many communities developed along the rail line, including Sellwood, Eastmoreland, Lents, and Pleasant Valley.  To encourage weekend rail use, the rail corporation developed destination parks, such as Oaks Amusement Park, along the line.  Passenger service was discontinued in 1958.  By 1990, the City of Portland had purchased much of the rail corridor.  In the following years, Metro purchased additional portions of the line.  The historic rail corridor is now the 21-mile recreational Springwater Corridor Trail that runs through the heart of the watershed, almost entirely along the creek. 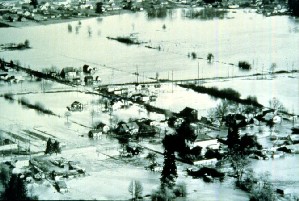 One of the most significant changes in the watershed occurred in the 1930s when the Works Progress Administration (WPA) attempted to control flooding by widening, deepening, and rock-lining the creek, creating a trapezoidal channel in 15 of the 26 stream miles. These actions disconnected the creek from its floodplain, degraded streambank conditions, and substantially altered Johnson Creek from its historical configuration. The actions did not, however, stop major flooding. Johnson Creek has exceeded flood stage 44 times since 1940 as of September 2020. Local residents have experienced at least seven floods causing major property damage in the last 35 years.

Salmon and trout were once plentiful in Johnson Creek, and at one time there was a small commercial fishery near SE 45th Avenue and Johnson Creek Boulevard. The last sightings of Johnson Creek "thick with salmon" range from the late 1940s to the early 1960s, although sightings of plentiful trout have been documented right up to the 1980s.

One of the most damaging floods happened in 1964. Approximately 1,200 structures were flooded, and over the next several years many attempts were made to address flooding problems. The Soil Conservation Service, the U.S. Army Corps of Engineers, and the Metropolitan Service District (Metro) all attempted to find solutions to frequent flooding. Residents in the watershed were divided between those living in the floodplains and those living in the uplands. Heated debates over how flood control was to be paid for and what the remedy, or remedies, should be have left plans for reservoirs, channelization projects, and regional detention facilities on the shelf.

The 1970s marked a period of residential growth in the watershed. Infill took place in the already densely urban areas. Many of the smaller farms in the upper watershed were converted to large nursery operations. The late 1980s through the 1990s brought several developmental pressures to the watershed. These activities include development on the slopes of the Boring Lava Domes, expansion of the urban growth boundary in the Kelley Creek tributary, urban renewal in Lents, and further infill of the frequently flooded areas along Johnson Creek.