Development Along the Willamette River 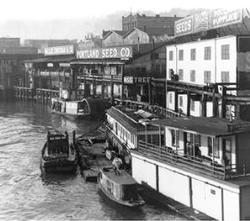 When the first settlers arrived in the Willamette Valley in the mid 1800s, they found a broad valley covered with clusters of oaks, tall fir, and grassy prairies. It looked like an untouched wilderness, but it was actually a well-managed system, the result of thousands of years of planned burning by the native inhabitants. The river itself flowed in shallow braided channels across a wide floodplain. It ran high in the winter, low in the summer, and full of fish all year.

But the new settlers were farmers and merchants, not hunters and gatherers. They planted crops and built towns, and they viewed the river as an important transportation corridor . Pulling snags and deepening the channel were the first ‘improvements' to the Willamette, and they allowed paddle-wheeled steam boats to take wheat to market and bring even more people into the valley.

Over the next century the river was ‘improved' even more. Sloughs and side channels were filled, irrigation ditches diverted 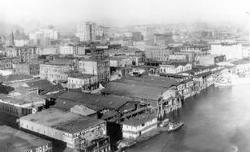 water from the river, gravel was dug out, and sewage was dumped in. The Willamette flooded as it had for millennia, but now there were towns and farms along its banks, and the high water was seen as a dangerous nuisance. By the early 1900s talk of ‘harnessing the river' was spreading, and the Willamette Valley Project became a reality in the late 1940s when the first dams were built.

The dams provided flood control and were considered by most to be a triumph of science and engineering. The cheap electricity that they also delivered was a bonus. At the time few people doubted the wisdom of 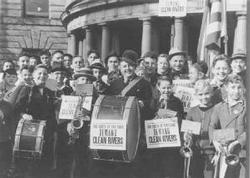 building the dams. There were fewer fish, but not many seemed to think it was too high a price to pay for growth and progress.

By the 1950s the river and its watershed had been ‘improved' almost beyond recognition. There had even been efforts to clean it up, the most notable the 1938 initiative that created a state sanitary authority, now the Department of Environmental Quality, to deal with sewage. But the growing postwar economy brought more industrial pollution, and the river suffered under heavy loads from canneries and paper mills. Governor Tom McCall's cleanup campaign in the late 1960s focused on those industrial contaminants, and it helped start the river back toward being ‘clean and healthy.' 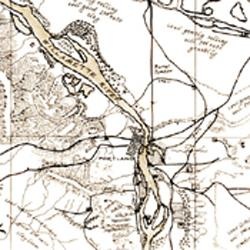 Those earlier efforts cleaned up most of the ‘point sources' of pollution, the readily identifiable pipes that discharged raw sewage or industrial waste into the river. But as we've learned more about the critical relationship between the river and its watershed, we've come to understand that just eliminating the source of pollution isn't enough.

The floodplain and riparian zone help control flood waters, reduce water temperatures, and provide critical fish and wildlife habitat. Researchers estimate as much as 85% of the Willamette's floodplain and riparian zone has been permanently lost to development. In the farming communities of the Willamette Valley, runoff carries fertilizers, pesticides, and topsoil into the river. In the urban areas, pavement and other hard surfaces speed the runoff into the river, carrying more pollutants and damaging the structure of both small urban streams and the Willamette itself.

Clearly the biggest impact on the Willamette comes from those of us living in its watershed. For more than 150 years we've 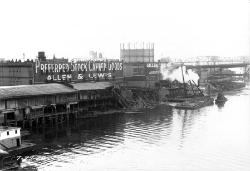 altered the landscape to suit our needs, and in the process we've dramatically altered the way the river works. If we want a clean and healthy river, we need to improve the health of the watershed.

The Willamette in Portland

Development of the Willamette's west bank in Portland began in the 1840s with the first docks to service the young port town. Before long steam engines had hammered in thousands of pilings and by the early 1900s nearly the entire waterfront from the Hawthorne Bridge to the Broadway Bridge consisted of pile-supported docks, warehouses and boardwalks. 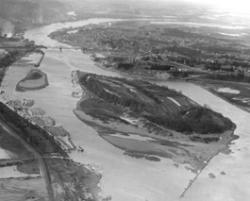 As the city grew, wetlands, including the mouth of Enois Creek in Marquam Gulch and Blackiston's Lake north of Burnside, were filled with massive amounts of sawdust, mill wastes, dredge spoils, gravel, debris from demolished buildings, and even garbage.

A succession of bridges spanning the Willamette claimed more riverbank with foundations and abutments. Perhaps the most dramatic transformation was construction of the massive Harbor Wall in the 1920s. Built in front of the rotting docks and collapsing buildings of the blighted waterfront, it moved the west shore of the Willamette River eastward. The remnants of Porland's past were buried under as much as 50 feet of fill to create Harbor Drive on what is now Waterfront Park.

Further to the north, fill was also added to the western bank of the Willamette River to create the current port facilities. Renovation of Port of Portland Terminal 2 began in the 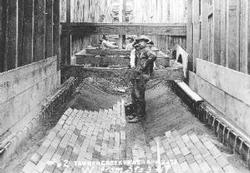 1960s and continued in the 1980's. The existing military port facilities were modified and dredge sand from the Willamette channel was used to backfill old berths and extend the shoreline to the east. Abandoned woodpiles may remain buried beneath the current facilities.

The low areas and sloughs on the east side of the river were filled as the city grew, especially after the consolidation of East Portland and Albina into Portland in 1891. Portions of Mocks Bottom and Swan Island were filled to facilitate industrialization of these areas. The east bank of the Willamette moved westward, and the river channel narrowed through downtown.

Swan Island was once a real island and separated two channels of the Willamette River. Prior to 1920, the eastern, deeper Swan Channel was the river's main channel. The current channel on the west side of the island was wide and shallow, with a shoal that vexed ship captains. A massive dredging project shifted the river channel and filled the causeway that now connects Swan Island to North Portland.

Open streams once flowed across downtown Portland and the NW industrial area. Tanner Creek once flowed into a low, swampy area called Couch Lake, which once extended from just south of the Steel Bridge to the Fremont Bridge but was filled between 1896 and 1919.

Most of the streams were diverted into the sewer system and their streambeds filled to make room for development in the late 1800s. An old cut-off meander of the Willamette River called Guilds Lake, an important feature of the 1905 Lewis and Clark Exposition, was filled for industrial expansion. Marquam Gulch and an unnamed lake were located near the west end of the Marquam Bridge, but are now buried under I-5.