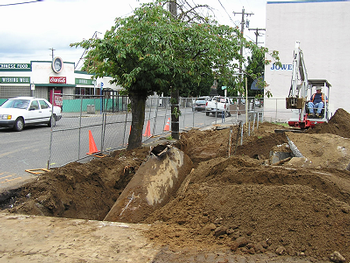 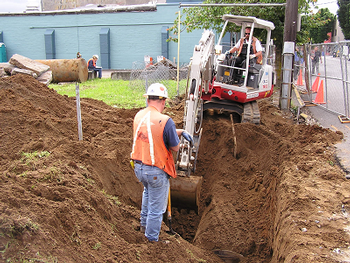 the U.S. Environmental Protection Agency (EPA) and the EPA allocated funding in November 2005.

The city removed all underground tanks and the contaminated soil underneath them and under the sidewalk. The cleanup included removing and replacing topsoil contaminated by lead and PCBs.

By this time the Portland Development Commission was no longer working in St. Johns, and transferred the property to the Bureau of Environmental Services. City Council, the Mayor's Office, and the Portland Brownfield Program coordinated a public involvement process that led to a public Request For Qualifications for site development.

The advisory committee developed a Request for Qualifications for site development. The initial selection, St. Johns Alley, was unable to move forward with their proposed plan and withdrew from consideration in December 2012. The committee then met with the next highest scoring submission, 2/3rds Project, which proposed a mixed use development with a variety of retail, office, and residential spaces.

City of Portland and 2/3rds Project entered into a Memorandum of Understanding in March 2013.

On January 29, 2014, City Council approved the Disposition and Development Agreement that will transfer ownership of the site. The development team for 2/3rds Project is currently fulfilling their obligations under the agreement.  Property transfer is expected by fall 2014.