The City of Portland is offering free technical seminars on ecoroof structure, design, construction, and permitting. An October 30 seminar is for property owners and do-it-yourselfers, and a November 2 seminar is for practicing or aspiring ecoroof professionals.

The seminars are free. Advance registration is required and space is limited. To register or to get more information email your name, address and phone number to BEScoroof@portlandoregon.gov. Information about Portland's ecoroof program is available at www.portlandonline.com/ecoroof. 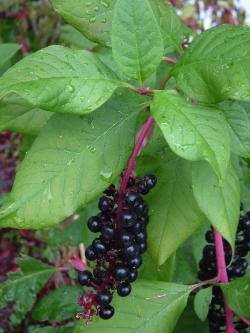 Portland property owners are reporting more sightings of pokeweed, an invasive plant relatively new to the area. Pokeweed is native to the southeastern United States, and is also found in the Midwest and all along the East Coast. Now it’s popping up around the Pacific Northwest.

Pokeweed grows from a large, carrot-shaped tuber to a three to eight-foot tall shrub with reddish stems and bright green leaves. It has white blooms in summer that develop into clusters of dark berries when the plant matures in late summer and early fall. Seedlings develop quickly, and become difficult to dig up after two or three years.

Although birds seem to be immune to the berries, every part of the pokeweed plant is toxic to people. Some people eat parts of the plant (poke salad is an example). But preparation is tricky and ingesting improperly prepared pokeweed can cause severe nausea, or even death.

If you spot pokeweed on your property, you should clip the berry clusters or blooms and put them in the trash, not in your yard debris container. The City of Portland’s Early Detection/Rapid Response (EDRR) Program may be able to help with removal. The EDRR staff is mapping known plants, removing berries from those plants, and researching more pokeweed management methods.

If you think you’ve seen pokeweed growing in Portland, or you think it’s growing on your property, please contact the EDRR Program at 503-823-2989. For more information, go to the 4-County Cooperative Weed Management Area website at www.4countycwma.org and click on “Weed of the Month,” or download a pokeweed fact sheet at www.portlandonline.com/bes/pokeweed.

This fall and winter, rain storms will cause combined sewer overflows (CSOs) to the Willamette River in Portland. The city's combined sewer system carries sewage and stormwater runoff in the same pipes. When it rains, the pipes fill to capacity and some of the sewage/stormwater mixture overflows.

CSOs are contaminated with bacteria. To protect public health, Environmental Services advises people to avoid recreational activities in the river this fall and winter during which water could be swallowed.

People who fish in the Willamette River should wash their hands following contact with the water. Those who choose to eat fish caught in the river should cook them thoroughly to kill bacteria.

When recreational river use is the highest between mid-May and mid-October, Environmental Services issues CSO advisories and opens warning signs on the river each time it rains. During Portland's rainy season from mid-fall through the winter and early spring, a seasonal CSO advisory is in effect. CSO warning signs on the river will remain open until summer advisories resume next May.

Portland will complete its 20-year CSO control program next year, in December 2011. Completion of the program will reduce CSOs to the Willamette River by 94%. After December 2011, Portland's combined sewers will overflow to the Willamette an average of four times each winter and once every three summers, instead of every time it rains.

English ivy and Himalayan blackberry are well-known invasive plants that threaten the health of Portland’s natural areas. But Portlanders may not be as familiar with some non-native tree species that are also aggressively invasive.

Nuisance trees grow rapidly and crowd out native and other desirable trees and shrubs. They take over light, nutrients, water, and space, and many extrude chemicals that prevent the growth of native shrubs and wildflowers.

The three worst tree invaders in Mt. Tabor Park are English hawthorn, sweet cherry and English holly. The understory of these trees is typically devoid of native wildflowers and shrubs. Replacing nuisance trees with a variety of native plants will increase the park’s plant diversity, which increases the diversity of animals that the park can support. Simply put, the more types of plants you have, the more types of animals you’ll have.

In October, the City of Portland started removing invasive plants in Mt. Tabor Park natural areas and restoring native vegetation. This work enhances watershed health by improving stormwater management and habitat, just as green streets do in urban areas. The project is part of Portland’s Tabor to the River Program.

The work includes using chain saws to cut down nuisance trees and applying herbicide to the stumps. This phase of the project will last through November. The city timed the work to avoid bird nesting seasons.

Park users may see a marked difference in some areas, and not much difference in others. Where nuisance trees were dominant, the forest will look more open. Where they have not yet taken over, the forest will look barely changed. Over time, all areas will fill in with a diversity of native trees and shrubs, either through planting where nuisance trees were dominant, or through natural regeneration where native and non-invasive trees are present.

The restored forest will be healthier. A diverse native plant community is more resilient, better manages stormwater, and provides a wider variety of food and shelter for wildlife.

Rosie wraps it up

Rosie started working in September 2007, and bored into the McLoughlin Shaft on Monday, October 18, 2010 to complete tunneling about four months ahead of schedule. Work is beginning now to prepare the nearly six-mile long, 22-foot diameter East Side Big Pipe for activation. The tunnel will be ready to accept combined sewage by late next summer.

The East Side Big Pipe contractor, Kiewit/Bilfinger Berger Joint Venture, will dismantle the tunnel boring machine and remove it from the McLoughlin Shaft. The contractor will either sell the machine back to the manufacturer or sell it on the open market for another tunneling job.

When CSO construction is complete in December 2011, Portland's combined sewers will overflow to the Willamette River an average of once every three summers and four times each winter instead of every time it rains. The entire 20-year CSO program will cost Portland sewer ratepayers an estimated $1.4-billion.