As part of Ecoroof Month, the City of Portland arranged a number of tours and presentations to complement the Ecoroof Portland event on March 18th.

While this time of year is good for Ecoroof Portland, particularly when the industry professionals are not busy constructing projects, it's not the best time of year for taking ecoroof tours. The weather is hit or miss, but we still had far more registration requests than we could accommodate.

The first stop was the Indigo @ 12 West - the relatively new downtown tower that's added wind turbines to the Portland skyline. The 5,000 ft² ecoroof was installed in 2010. This project also illustrates the complexity of incorporating sustainability into a building in the city center - despite the stormwater management benefits of the ecoroof, Bob Sallinger pointed out the impacts the transparent glass perimeter may have on birds. The Audubon Society of Portland's Bird Safe Portland Program is investigating bird window strikes frequency and how facades like these can be improved. 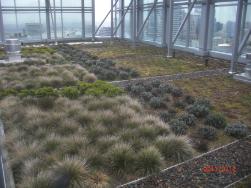 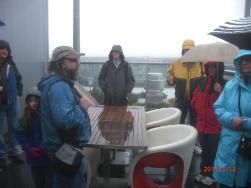 The next stop was the Multnomah County Central Library, where the group toured the 7,300 ft² ecoroof system installed in 2008. This was the first ecoroof installed on a historic building in Oregon. Learn more about the history of this project here. 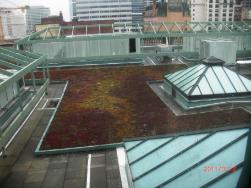 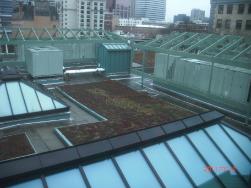 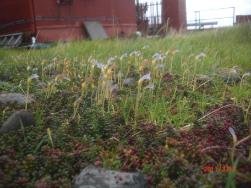 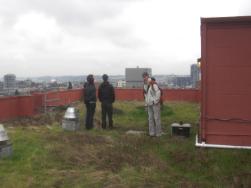 As the weather worsened, the tour attendees succumbed to the cold and dispersed before making it to the last stop at Portland State University's Green Building Research Laboratory. The PSU team is doing some very important research on ecoroof performance with regards to energy, stormwater management, and photo-voltaic integration. The videos below, created by Green Science Oregon, provide a great overview of their work. (as well as more footage of Indigo and Hamilton West Apartment roofs).

Many thanks to Tom Liptan of BES, Bob Sallinger of the Audubon Society of Portland, Matt Edlen of Gerding-Edlen, the staff at Indigo @ 12 West, Multnomah County Central Library, and the team at Portland State University Green Building Research Lab for your participation on this tour. And special thanks to all the attendees that hung in there despite the weather.