We reached the end of March with a long exhale and high-fives. It's hard to believe how much happened during Ecoroof Month, but if you've followed along with our recaps you know it was quite a bit. So, for the fun of it, here's an Ecoroof Month Recap Recap: a summary of the activities and accomplishments for Ecoroof Month 2011.

5 local and international experts and 10 presentations

4 tours with over 100 attendees

Over 450 attendees at Ecoroof Portland

Over 40,000 hits on the Ecoroof Program website in February and March

Ecoroof Program staff delivered a progress report to City Council titled “Ecoroofs in Portland: At a Tipping Point”, focused on several indicators of a bright future for the ecoroof industry. We also heard supporting testimony from ecoroof advocates, including developer Todd Liebow, architect Shawn Sullivan, Deane Funk of PGE, and Jon Crumrine of Enviroscapes Northwest, Inc. To see the video of the presentation, click here and start the video at minute 14:00.

Ecoroof Month included a series of presentations and workshops with some of the leading local and international experts: 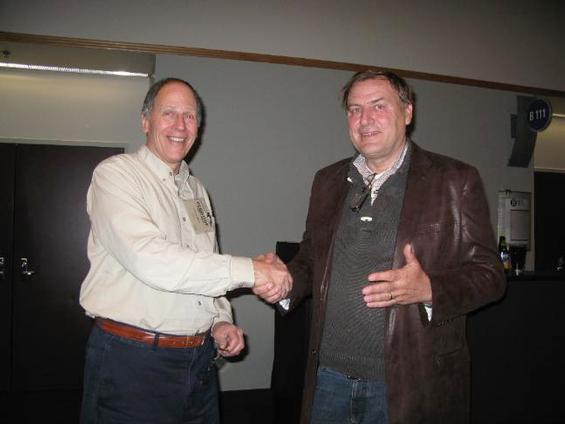 This year, we also offered a series of project tours to give Portlanders access to some private ecoroofs. We offered 4 tours total, visiting 16 ecoroof projects in South Waterfront and the OHSU campus, the Pearl District, Downtown, and on the Eastside.  Over 100 people attended the tours. Tour leaders included staff from BES, Green Above Ground, Portland Audubon, and Urban Greenspaces Institute. 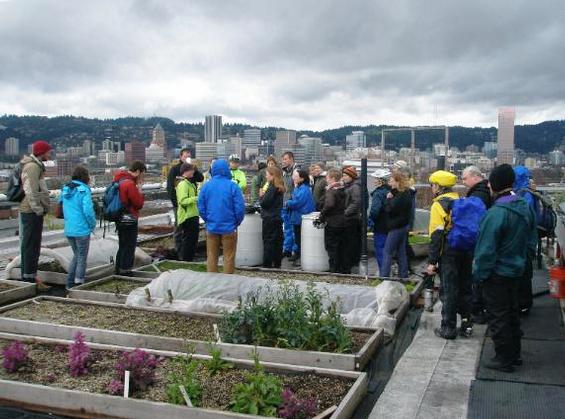 Over 30 bicyclists took part in the Eastside Ecoroof Bike Tour

The third annual Ecoroof Portland event and vendor fair, was held at the Oregon Convention Center. Nearly 40 vendors, over 450 attendees, and 2 keynote addresses filled out the program. Dr. Wolfgang Ansel presented “A comparison of Green Roof Policies in Europe, Asia and the US”. Paul Kephart presented “Trends and Innovations for Green Roofs Today” 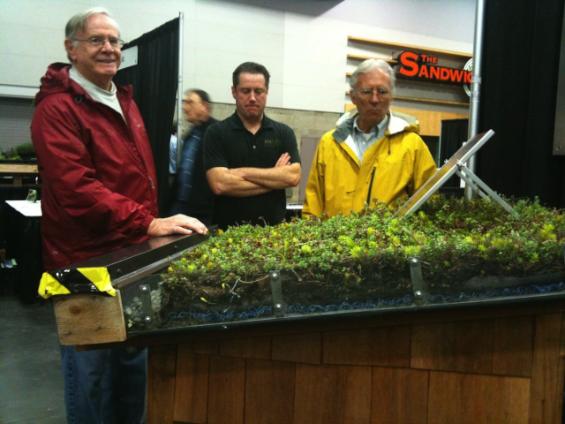 There were lots of hands-on ecoroof displays at Ecoroof Portland

For the live demonstration, 15 students and faculty from ACE (Architecture, Construction, and Engineering) Academy constructed a green roof model. Aided by the Roofer Apprenticeship Training Program staff and several of the Ecoroof Portland vendors, the students worked throughout the day to show off their skills. The highlight of the entire event was realizing the connections made between the students and practicing industry professionals. According to Marjan Rotting, the ACE instructor leading this project, the “students identified perspective companies where they might find internships or summer employment. There is nothing as satisfying for a teacher as seeing the students inspired to learn, and the Ecoroof convention did just that.” 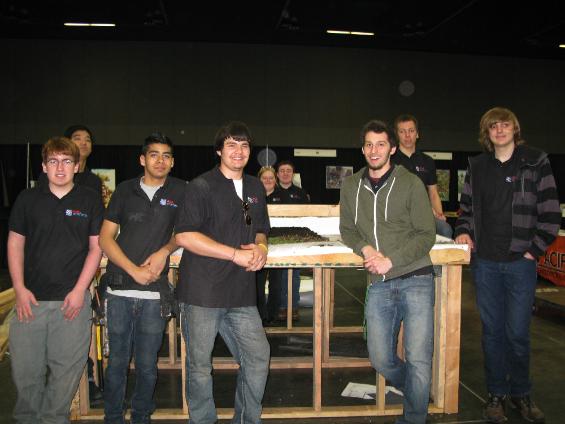 The students from ACE Academy show off their demonstration ecoroof

To build awareness, we developed ecoroof-based networking accounts via social media. We picked up over 100 fans on Facebook, and over 50 local professionals connected to us with LinkedIn. There’s no doubt these tools helped us increase traffic on the Ecoroof Program website, which received close to 40,000 hits in February and March, which put us over 100,000 hits for the last 12 months – a new record. We’ll keep these accounts running, as they will help us create buzz for future events and opportunities.

We took advantage of our time with Wolfgang Ansel by coordinating a brainstorming session with him, BES, and members of the Green Roof Information Think-tank (GRIT). The topics focused on how the Portland ecoroof industry can prepare for the next 10 years. Much of this discussion revolved around the role of GRIT and how to expand on existing policies to incent or integrate more ecoroofs into Portland’s urban form. 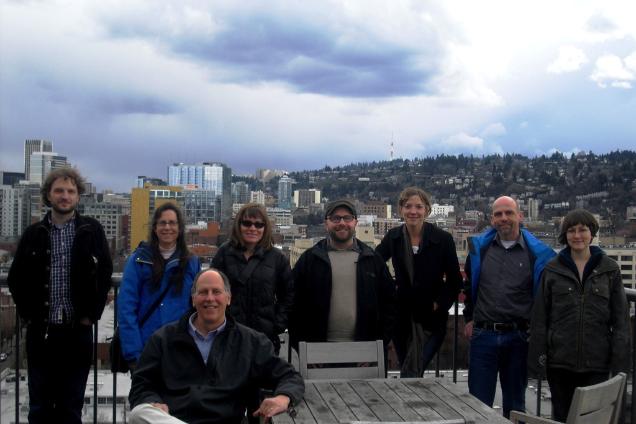 At Asa Flats and Lofts, from left to right:

The list of individuals, groups and organizations that participated in Ecoroof Month activities is remarkably long and diverse.  Thanks to everyone that made this month happen, especially: Bureau of Environmental Services, Office of Healthy Working Rivers, Bureau of Planning and Sustainability, Mayor Adams and staff, Commissioner Dan Saltzman and staff, and members of City Council, Audubon Society of Portland, the Intertwine, Urban Greenspaces Institute, Green Above Ground, Social Enterprises, the Oregon Convention Center and the many volunteers that pitched in to help things run smoothly.