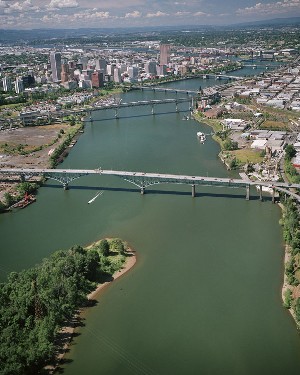 Yes. But they are rare. You can check for current CSO (combined sewer overflow) alerts on our homepage as well as at www.portlandoregon.gov/bes/overflow and 503-823-2479.

Overflows have dropped dramatically to the Willamette River and Columbia Slough because of the $1.4 billion Big Pipe project, a 20-year CSO control program that Environmental Services completed in 2011.

That ratepayer-funded project reduced overflows to the Willamette River by 94 percent and to the slough by 99 percent. With the new system, there typically will be no more than an average of four Willamette River CSOs per winter and one every three summers. (Summer is defined as the season from May through September). It takes exceptionally heavy rain to trigger an overflow.

When Portland began its 20-year CSO control program in 1991, there were an average of 50 CSO events per year.

Can I swim in the Willamette River?

You can find the latest bacteria counts and temperatures at our Willamette River Recreation Index. Tests are done weekly during the summer. During 2017, all test results showed bacteria levels in the "green" range - well within state health guidelines.

Even so, there is still bacteria in the lower Willamette River from many sources, including waste from dogs and wildlife. During the rare event when there is a combined sewer overflow, we notify the public via news alerts that are sent to the news media, posted on Twitter and on our website's homepage: www.portlandoregon.gov/bes  and 503-823-2479. You can also check the Oregon Health Authority's Recreational Advisories page for information on other advisories, such as algae blooms.

Since Portland completed its CSO control program in December 2011, more people are enjoying the river when the weather is good. The annual Big Float is a good example.

Even though Willamette River bacteria levels are low, it's never safe to swallow water from urban rivers and streams. 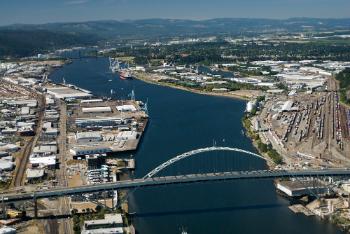 How does the Portland Harbor Superfund site affect water quality?

A 2011 report by the Oregon Health Authority's Evironmental Health Assessment Program (EHAP) stated that boating, swimming and other forms of recreation in the Portland Harbor area are not threats to human health.

Can I eat fish from the Willamette River?

The advisory does not apply to non-resident fish (salmon, steelhead, lamprey) that travel through the Portland Harbor area.

Click here for more information about fish in the Willamette and fish consumption guidelines.