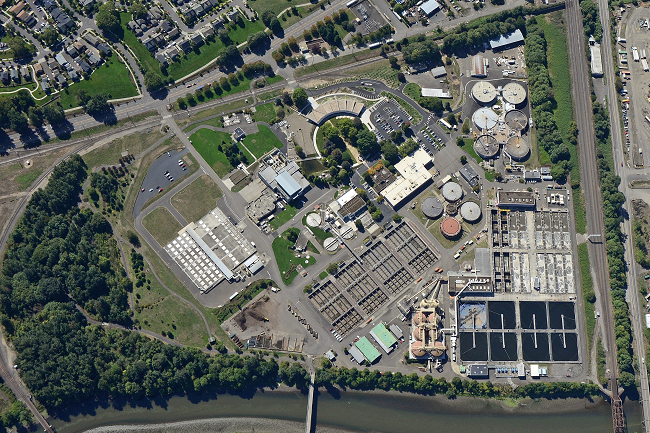 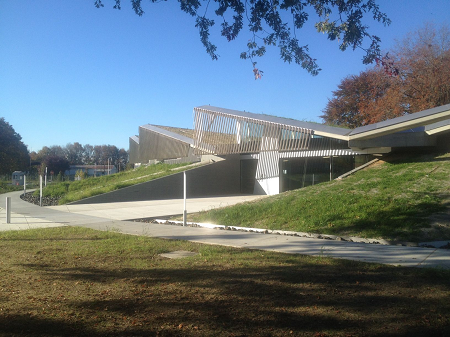 The Columbia Boulevard Wastewater Treatment Plant is part of a collection and treatment system that serves over 600,000 residential and commercial customers. The plant operates every day around the clock to manage, monitor and adjust the treatment process. Sewage pump stations and pipes convey wastewater to the facility 24 hours a day.

"To protect public health and the environment" is the mission of the Columbia Boulevard Wastewater Treatment Plant. Stewardship of our natural resources and service to the community are the underlying reasons that many plant employees chose a career in wastewater treatment.

The staff is specially trained to manage, monitor and adjust the treatment process. Dozens of pump stations and thousands of miles of sewer lines are part of the system that brings wastewater to the facility 24 hours a day.

Why We Treat Wastewater 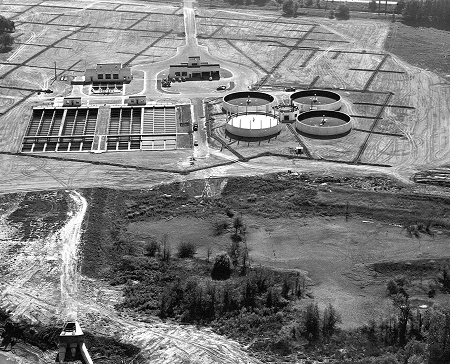 Portland first began treating its wastewater in 1952. Before then the city's industrial discharges, agricultural waste and sewage emptied directly into the Willamette River and Columbia Slough. The water became dangerously contaminated. When Portland citizens realized it would take new infrastructure to help clean up the problem, they approved a $12 million bond issue to build a wastewater treatment facility.

The Columbia Boulevard Wastewater Treatment Plant is the last stop for Portland's wastewater. A trip through the treatment plant removes most of the suspended solids and dissolved materials and sends a river water quality effluent to the Columbia River. The city recycles some of the solids for use as a beneficial soil supplement.

The Columbia Boulevard plant has a two-phase treatment process. The primary phase screens out large debris for landfilling, skims off grease, oil and floatable solids, and collects and thickens settleable solids.

In the secondary phase, naturally occurring microorganisms feed on organic pollutants in the wastewater and the resulting residue is separated. After disinfection, the treated water flows into the Columbia River.

Finally the treatment of solids removed during the primary and secondary phases produces biosolids. Processing extracts water to make a concentrated, stable material and speeds natural decomposition. Microorganisms living at a constant temperature in an oxygen-free environment aid solids decomposition. The city uses biosolids as a soil supplement on dry pasture land.

Innovations and the Future

An anoxic flow process added to the secondary phase in 1993 makes Columbia Boulevard one of the largest treatment plants in the country to convert to this process. The $12 million addition eliminates unwanted microorganisms and minimizes the need for chlorination while increasing secondary treatment flow from a maximum of 120 million gallons per day to 200 million gallons per day.

Construction began in late 2012 on a Secondary Process Improvement (SPI) project using step feed technology to increase treatment in our biological aeration basins by up to 25%. 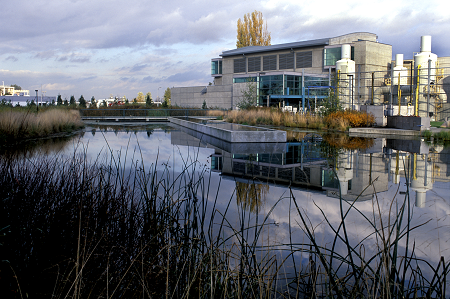 In 1997, Environmental Services opened a new headworks facility, replacing one of the oldest parts of the Columbia Boulevard plant. The headworks provides preliminary wastewater treatment. Large screens remove debris, grit, and sand from the wastewater flow. The facility is totally enclosed and chemical scrubbers clean the air before it is discharged. Landscaping around the building features native plants, a pond, and a wetlands. 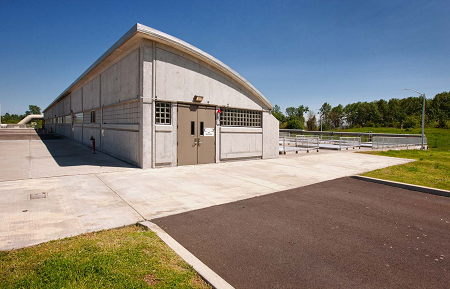 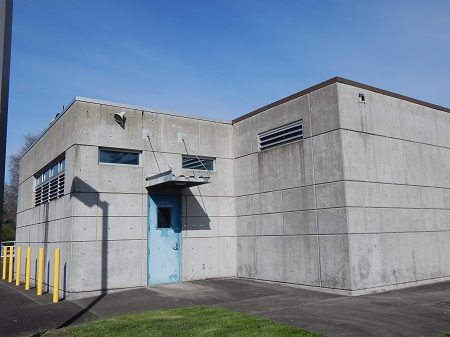 In 2000, Environmental Services completed construction of the Columbia Slough Consolidation Conduit to keep combined sewage from overflowing to the Columbia Slough. To get this mixture of stormwater and sewage from the Big Pipe to the Headworks, Environmental Services built an influent pump station in 1999. The pump station is about 96 feet long, 30 feet wide and 40 feet deep. The only part of the facility visible above ground is a small building that houses electrical and control systems. The facility has three small motor-driven pumps that pump up to 30 million gallons per day (MGD) during dry weather. During heavy rain storms, three high-flow pumps activate to pump an additional 75 MGD. Finally, three peak flow pumps, rated at 16 MGD are called in to service making the total pumping capacity 153 MGD. 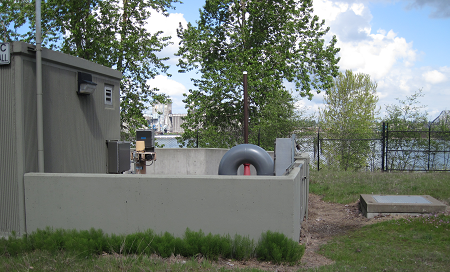 Environmental Services uses sodium hypochlorite, a strong bleach, to disinfect treated wastewater before it is discharged to the Columbia River. To reduce chlorine residual to no more than one part per million, Environmental Services built a dechlorination facility on the banks of the Columbia at Hayden Island. The facility uses liquid sodium bisulfite to dechlorinate treated wastewater.The facility opened in 2000 and has a four-cell mixing chamber and a separate 2,000 square foot chemical storage and metering building.

The Columbia Boulevard Wastewater Treatment Plant is committed to eliminating odors that are perceptible beyond the plant's boundaries. Environmental Services spent $5 million to meet that goal by 2006. The plant currently uses natural biofilters and chemical scrubbers to capture foul odors from wastewater and sludge. People who live within two miles of the plant are invited to become odor monitors to help us control odors.