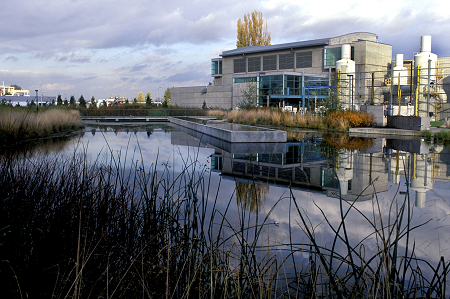 Wastewater enters the plant through a 138-inch wide channel. This is the beginning of the treatment process. Water enters the screenhouse and is diverted to smaller channels where the speed of the flow is reduced. Here coarse grit like rocks, pieces of metal, sand and gravel is removed. The water then flows through bar screens, which remove plastics, rags, twigs and other debris. Each day, approximately sixteen tons of this material is removed at the headworks and taken to a solid waste landfill. 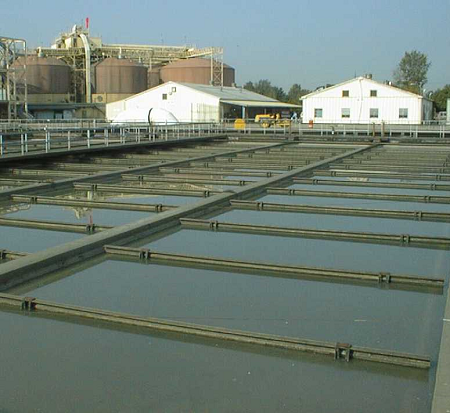 The eight sedimentation tanks accept about 70 million gallons of wastewater per day in dry weather and a maximum of 275 million gallons per day. The water moves very slowly in these tanks to allow dense solids to sink to the bottom while oil and grease float to the top.

The water spends an average of two hours in the settling tanks where slats called "flights" skim the surface, then drop down to scrape sludge along the tank bottoms. The sludge goes to a thickener tank. Material skimmed from the top of the sedimentation tanks goes to a separate tank where it's concentrated and conveyed to the digesters.

At this stage, the removed solids are being processed in a different part of the treatment plant although the wastewater still contains suspended solids and dissolved materials. This wastewater goes to the secondary treatment process. 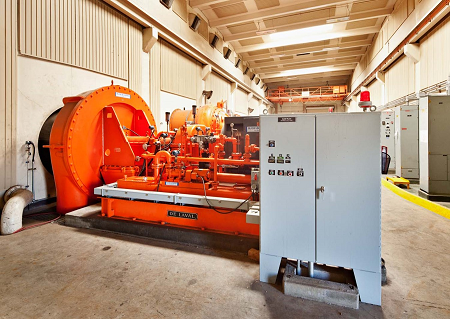 In secondary treatment, a carefully controlled environment supports trillions (10.625 trillion to be exact!) of living microorganisms in aeration tanks. The tanks maintain a delicate balance between dissolved oxygen, food and the right kind of microorganisms.

The microorganisms need oxygen. Four blowers are available to feed oxygen into the tanks through fine bubble diffusers. The microorganisms use 65 thousand pounds of oxygen every day. This process is the largest single energy consumer in the treatment plant, costing more than $1 million per year to operate.

During the three hours spent in the aeration tanks, the microorganisms feed on organic pollutants.

Nature would accomplish what's done in this part of the treatment process, but it would take seven to ten days and miles of flowing river. With the influx of millions of gallons of wastewater every day, the process needs to be enhanced and accelerated. The treatment plant does this job on a 30-acre site in four to six hours. 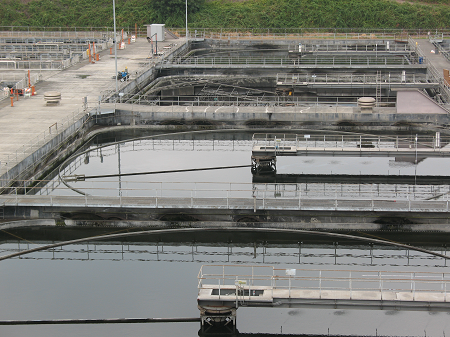 From the aeration tanks, the waste stream flows to the secondary clarifiers. These tanks are outfitted with a sweep mechanism that travels around the base of the tank and a flight that travels along the surface of the water.

The microorganisms that consume pollutants in the aerators sink to the bottom of the clarifier tanks. This material is called Return Activated Sludge. The sweep mechanism takes the Return Activated Sludge off the floor of the clarifier tanks and pumps most of it back into the aeration tanks to sustain microorganism populations. Gravity belts thicken the rest, then carry it into the biosolids digesters. This sludge then becomes part of the land application process.

The skimmings that form on the surface of the clarifiers go back to the headworks for reprocessing.

The treated water leaves the final clarifiers and enters the outfall. The water is disinfected as it is piped to the Columbia River two miles away. About 50,000 gallons flow into the river each minute.

The liquid treatment process removes sludges from the wastewater. These sludges are nutrient-rich, organic materials. They must be processed to remove liquid, reduce odors, separate flammable gases, destroy bacteria, reduce vector attraction and other nuisance factors and create a consistently stable material.

Sludges removed from the primary settling tanks are directed to a gravity thickener, then pumped to a digester for biological treatment. Sludges at this point are four to five percent solid.

The liquid removed at this stage returns to the primary treatment process.

Pumps move the thickened sludges into one of the anaerobic digesters. Each digester holds between 1.3 million and 2.4 million gallons. For two to four weeks, the sludges stay here in an oxygen-free environment while microorganisms that thrive in this environment decompose them. The digesters maintain a constant temperature throughout this part of the process.

One of the byproducts of this treatment is methane gas. The digesters have floating covers. Gas production forces the covers to rise and allows the gas to be piped out. The city sells some gas to a nearby industry, heats plant buildings and digesters with some and burns off the rest. 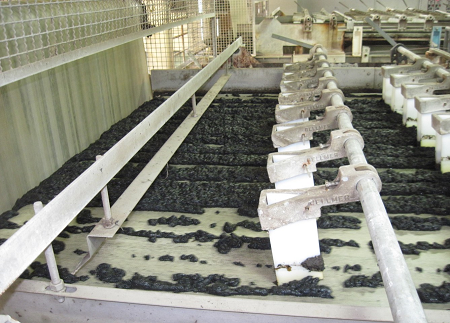 When the digesters have finished their work, the sludges have been transformed to biosolids; a stable substance that is still about 98 percent liquid. The digested biosolids transfer to belt presses that squeeze out more water leaving a "cake" that is typically 20 percent solids and ready for land application. 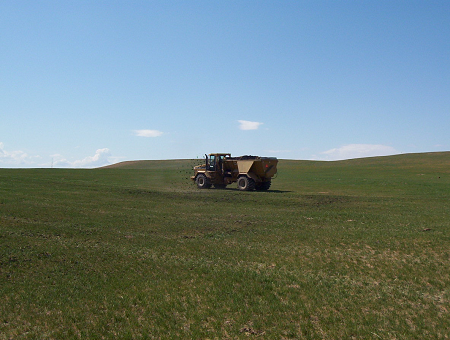