The Clean Water Act celebrated its 40th anniversary on October 18. The groundbreaking legislation regulated pollution sources and strengthened water quality standards and basically revolutionized how we protect our rivers and streams.

The Oregon Department of Environmental Quality required Portland to control overflows of combined sewage and stormwater to the Columbia Slough and the Willamette River. Over 20 years, the city completed a series of projects to virtually eliminate combined sewer overflows (CSOs) to the slough and reduce Willamette River CSOs from an average of 50 a year to no more than four per winter and one every third summer.

The CSO program also spurred Portland’s efforts to keep stormwater runoff out of sewers. The city has become a leader in innovative green infrastructure approaches that use plants and soil to mimic natural conditions and allow rain to soak into the ground as soil and plants filter pollutants.

Oregon Public Broadcasting has been focusing on green infrastructure techniques this week, showcasing excellent examples from Portland and Seattle, and asking If Green Roofs and Rain Gardens Are So Great, Why Aren't There More?

Why is all of this important? Well, look at water quality in the Willamette now. Athletes in the annual Portland Triathlon swim the Willamette. Events like the Big Float are getting people back on the river, and when they do they see first hand just how clean our river is. There's still much to do, but the Willamette River has come a long way and is an even more valuable resource for the people, fish and wildlife that depend on it. 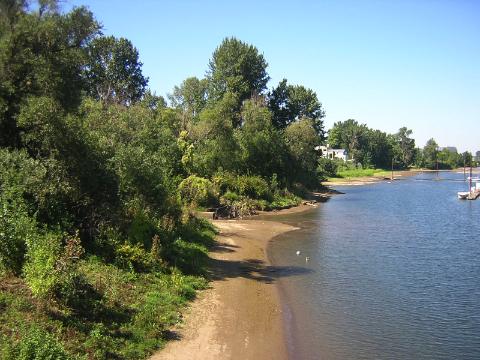