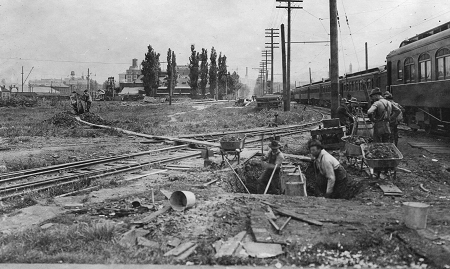 Portland's first sewer was a covered wooden trough that ran down Southwest Montgomery Street from Fourth Avenue to the Willamette River. Built in 1864, this simple system collected sewage from homes and businesses and carried it directly to the river. Over the following years, the collection system grew. By 1883, the City had installed 15 miles of terra cotta pipe ranging in diameter from 9 to 18 inches. By 1933, larger pipes made of concrete or brick extended the system to 1,100 miles of pipe that conveyed sewage directly into the Willamette River and the Columbia Slough.

In the early 20th century, public concerns about water pollution and public health increased. Tests in 1927 showed that the Willamette flowing through Portland was severely polluted. By the mid-1930s, salmon fingerlings placed in the river died within 15 minutes. Pollution had robbed the river water of nearly all its oxygen. The untreated sewage also carried disease-causing bacteria and other contaminants into the river. Swimming was banned.

Citizens took action. More than 4,000 Portland schoolchildren held a rally outside City Hall in November 1938 to demand cleanup of the river. Later that year, Oregon voters initiated and passed the Water Purification and Prevention of Pollution Bill. A newly established State Sanitary Authority began to enact wastewater treatment requirements for both cities and industries. 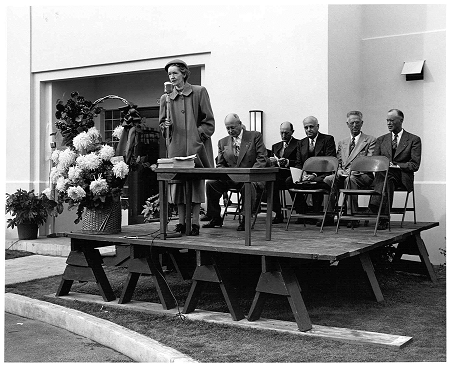 Portland responded by building the Columbia Boulevard Wastewater Treatment Plant (CBWTP) and a new system of collection pipes and pump stations. The plant opened in 1952 and began discharging treated wastewater to the Columbia River. The result was a huge improvement in the Willamette's water quality.

Much of Portland is served by a combined sewer system, which carries sewage and stormwater runoff in the same pipes. CSOs occur during extremel rain events when large amounts of stormwater fill combined sewers to capacity causing overflows directly into the Willamette River.

Construction of the CBWTP was a significant milestone for Portland. Until then, raw sewage, industrial discharges and agricultural waste emptied directly into the Columbia Slough and Willamette River. These waterways had become so dangerously polluted that they were unsafe for both people and fish.

Portland's citizens responded to the crisis by approving a $12 million bond issue to build a wastewater treatment plant that would help decrease pollution. The new facility demonstrated the city's commitment to a healthier future. 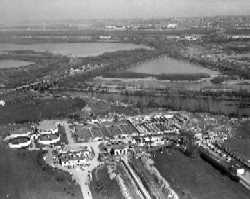 Other improvements included additions to the administration building and screenhouse and increasing the size of the influent pipe.

Soon after the primary treatment expansion, the City built sludge lagoons just north of the plant. The lagoons provide Portland with flexibility in its program to recycle the solids generated by wastewater treatment.

In 1978, Environmental Services removed some of the lagoon contents, reconfigured the internal dikes, and raised the perimeter dike. In 2001, a multi-year and multi-phase program began to rehabilitate the lagoons. The first phase was the addition of an internal dike that will allow renovation of half of the facility, while keeping the other half in operation.

Sludge processing was the focus of treatment plant improvements in the 1980s. The heat treatment system was replaced with four new 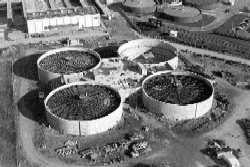 anaerobic digesters in 1983. This tripled the plant's digester capacity. A third primary sludge gravity thickener was added with the new digesters.

Soon after, four belt presses replaced centrifuges as dewatering equipment. Then, in 1984, a 60-ton per day in-vessel biosolids composter was constructed. The composter produced a recycled landscaping product for local use until it ceased operation in 1999.

A series of projects in the early 1990's improved program efficiency and site safety. A maintenance/stores building was built in 1991 to modernize and consolidate mechanical maintenance facilities, warehouse and purchasing facilities, and offices for operations and maintenance staff.

New biosolids conveying and storage facilities were added as the city began to focus on its land application recycling program. 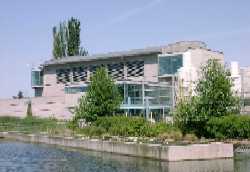 Since the mid-1990s, several important projects have been completed at the CBWTP. The projects represent both significant investments in the wastewater treatment system and a new way of doing business. One major project was replacement of preliminary treatment systems (screening and grit removal) and the addition of influent pumping in a new "headworks" facility.

The new Headworks features the latest wastewater equipment technology. The facility also benefitted from staff and citizen advisors. All treatment processes are automated and covered or contained. The Headworks features the latest in odor control technology. The building includes interpretive areas for the public and is surrounded by extensive landscaping and a water feature.

The CBWTP chlorination system was expanded in 1999 in order to disinfect peak flows of up to 340 mgd. 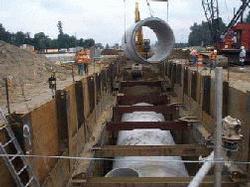 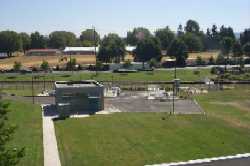 Environmental Services built an influent pump station to pump sewage from the Big Pipe into the CBWTP. The facility has a peak capacity of 105 mgd. Together, the Columbia Slough CSO projects reduced CSOs to the Slough by 99%.

The treatment plant has expanded to accommodate wet weather flow from both theColumbia Slough basin and the Willamette River basin. New dry weather primary clarifiers were added to replace the original 1952 facilities. The new clarifiers are covered and equipped with odor control.

The old primary clarifiers were converted to wet weather use. Completing a new wet weather outfall system to the Columbia River and adding a dechlorination facility on 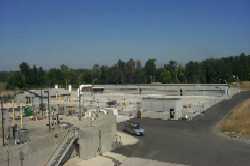 2011: The Big Pipe Project is complete

Environmental Services completed a 20-year program to eliminate almost all combined sewer overflows (CSOs) to the Willamette River and Columbia Slough, ending an era of regular discharges of stormwater and sewage to the environment..The program deployed a variety of techniques, from downspout disconnection by homeowners, to the construction of three Big Pipes or tunnels, to capture and send those flows to the treatment plant.

The plant constructed digesters 9 and 10 to accommodate increased wastewater flow.

This facility added an additional 150 million gallons per day of screening capacity to our Wet Weather Primary Treatment system.

The system uses live bacteria living on moistened bark chips to strip odors from the large Portsmouth tunnel before wastewater from the tunnel enters the treatment plant.

The Columbia Boulevard Wastewater Treatment Plant covers approximately 140 acres and is part of Portland's extensive wastewater collection and treatment system. The plant serves 614,000 residential and commercial customers. Wastewater is transported to the treatment plants through a network of more than 2,256 miles of pipes that range in diameter from 4 to 144 inches. Some pipes carry wastewater only (the sanitary sewer system), while others carry a combination of wastewater and stormwater (the combined sewer system sewer system). About 96 pump stations help move the flow along when gravity alone is not sufficient.