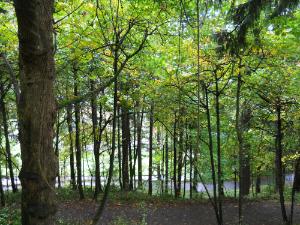 The Mt. Tabor Invasive Plant Removal and Revegetation Project is entering its third year. The first two years were largely focused on controlling invasive plants such as English ivy and Himalayan blackberry. To date, invasive plants have been controlled on over 66 acres of natural area by BES Watershed Revegetation Program staff and volunteers with both the Friends of Mt. Tabor Park (FMTP) Weed Warriors and Portland Parks & Recreation. You may recall the Weed Warriors received a Spirit of Portland Award last month for their leadership and hard work.

Invasive plant removal continues to be a major part of the work, but there are two major planting events coming up at the beginning of 2013: volunteers will be planting native plants in January, and BES will be planting over 20,000 native trees and shrubs in February.

For more information on recent and future work, see the November 2012 project update.