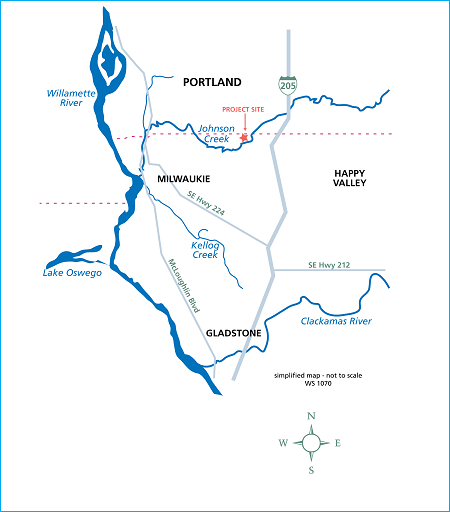 The 2001 Johnson Creek Restoration Plan identified the Luther Road project as a priority due to untreated stormwater outfalls, the exposed Lents Interceptor Sewer and habitat improvement opportunities. In summer and fall 2014, Environmental Services worked on a project to protect public health, restore a portion of Johnson Creek and its floodplain, improve stream habitat and water quality, protect natural areas and create a needed community resource.

The 76-inch diameter Lents Interceptor Sewer crosses Johnson Creek at the project site. Erosion in the creek bed and banks had exposed a portion of the sewer pipe and a nearby manhole, increasing the possibility of pipe damage and blocking fish passage. A break in the pipe would have released a significant amount of sewage and threatened public health and wildlife, including sensitive, threatened and endangered species.

This project buried the sewer pipe crossing in Johnson Creek to stabilize it, established a new stable stream crossing, and moved the creek and its floodplain away from adjacent private property. Environmental Services addressed a similar issue in 2006 at Tideman Johnson Park where another portion of the Lents Interceptor was exposed in Johnson Creek. The difference between these two projects is that the availability of undeveloped land in the Luther Road project area allowed Environmental Services to relocate part of the creek. 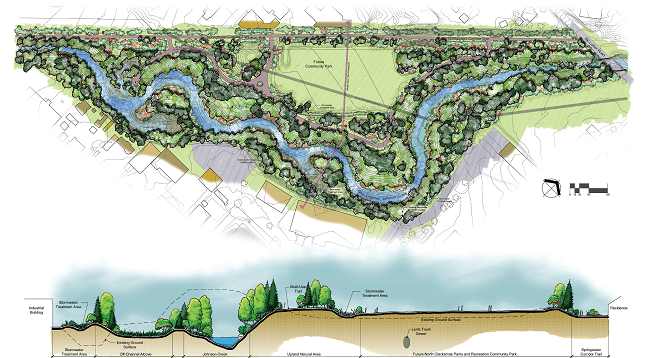 The project was a partnership between Environmental Services, Metro* and the North Clackamas Parks and Recreation District (NCPRD). The project site comprises 10 acres of open space that the three agencies purchased in 2009. Six acres will remain natural area. The NCPRD will convert four acres into a park. The site is adjacent to the Springwater Corridor Trail and Johnson Creek near SE 72nd Avenue and Luther Road in Clackamas County.

Before construction in 2014, the project site had been in a state of disuse for many years, attracting transient activity and creating unsafe conditions. The Luther Road project removed debris and garbage, will create a trail system and lays the groundwork for a community park.

Environmental Services started work on the project in July 2014, completed construction in November 2014, and planted the site in 2015. NCPRD plans to create a community park on the site in the future.

For questions about the Luther Road Habitat Restoration Project, call 823-502-5781.

* Metro's share of the property purchase came from the natural areas bond measure voters approved in 2006.