These are just some of the observations made by a virtual army of citizens scientists on the Audubon Society's January 5th Portland Christmas Bird Count.  Every winter season since 1926 volunteers have spent a full day identifying and counting birds within a 15-mile diameter circle in Portland.  The count is one of hundreds across the nation and an excellent way for citizens to contribute to long-term biological monitoring. You might have heard about this event on NPR a couple of weeks ago.

With 128 avian species tallied this year, the teams set a new record for the Portland count. Portland also broke its own record for human counters with 230 volunteers.  In fact, Portland has the highest number of observers of any count in the nation.

The high number of bird species found reflects the diversity of habitats found across Portland’s watersheds.  It is a good indicator of the success of Portland’s investments over the decades in protecting nature in the city, such as the recently-acquired Catkin Marsh natural area.   And, the new green infrastructure we’re building to manage stormwater in urbanized areas, such as ecoroofs near the Willamette River, also benefits birds and other wildlife.  The City’s Terrestrial Ecology Enhancement Strategy and the Portland Audubon Society website have more information about Portland’s wildlife. 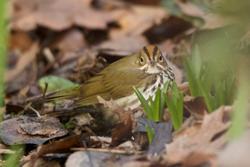 The rarest bird by far in this year’s count was an ovenbird found in a Laurelhurst neighborhood backyard.  Ovenbirds rarely fly anywhere west of the Rockies, and this time of year they are all in Central America and the Caribbean like many related species of warblers.  A first occurrence for our area and quite a rare sight!