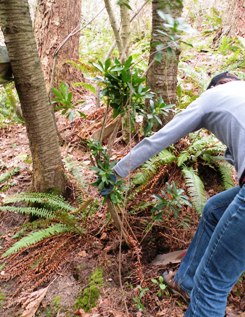 What is the species?

Spurge laurel is a shrub species native to western Europe and north Africa. A hardy evergreen, it has become a species of concern both in the Puget Sound area, as well as the Willamette Valley.

Why are we concerned?

How does it spread?

Spurge laurel is spread by seed and by rooting from stems, but not by root fragments. Spurge laurel seeds move by:

Spurge laurel has 3-5” long, dark green leaves, arranged in spiral clusters at the ends of branches. Branches are spindly, and almost completely without leaves except at the ends. They also have a tendency to creep along the ground before bending upwards. Small, yellow-green flowers appear in January, giving way in March to groups of green berries that ripen to black by early summer.

Are there any lookalikes?

Spurge laurel is most often confused with rhododendron, but can easily be distinguished. Rhododendron fruits and flowers are found above the leaves; spurge laurel hides them under the leaves. Some species of leafy spurge also bear a strong resemblance but these have a milky latex that bleeds from broken plant tissues.

How do we deal with it?

How can folks help?

If you suspect you’ve found spurge laurel, feel free to contact us at the city of Portland, but for the most part, we are no longer treating spurge laurel on private property.