In late January and early February, as part of the Tabor to the River Program, Environmental Services' Watershed Revegetation Program and contract crews planted 17,000 native trees and shrubs on over 32 acres of Mt. Tabor Park’s natural areas. Many thanks to the East Multnomah Soil and Water Conservation District (EMSWCD) for making the planting possible through funding from their Partners in Conservation grant program. Some of the native trees planted were: Big-leaf Maple, Madrone, Douglas-fir, and Cascara. Some of the native shrubs planted were: Vine Maple, Indian-plum, Snowberry, Trailing Blackberry, Red and Blue Elderberry, and Thimbleberry. Learn more about the planting here. 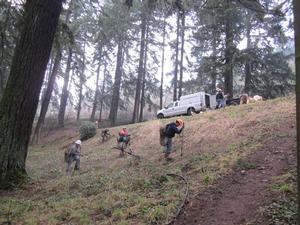 Also, on January 26th, the Friends of Mt. Tabor Park (FMTP) Weed Warriors and Portland Parks and Recreation (PP&R) planted more than 850 native plants in the area. See photos from the planting here. Learn how you can get involved with the Weed Warriors at www.taborfriends.org.

Over time these native plants will mature and provide many benefits to the park, including: