At its April 9, 2013 meeting. the Oregon State Land Board gave Portland’s Streamlining Team the 2012 Land Board Partnership Award. The award recognizes exemplary partnerships with the board and the Department of State Lands.

Governor John Kitzhaber, chair of the Land Board, praised the team for their “…cooperative, multi-agency approach to waterway permitting. Their work results in a more streamlined process, less time spent on resolving issues, and better outcomes for applicants and the regulatory agencies.”

Early in 2003, Portland entered into an agreement with federal agencies to streamline city projects, such as stream restoration and capital improvement work, that trigger Endangered Species Act requirements. The city’s agreement with NOAA Fisheries, the Army Corps of Engineers and the U.S. Fish and Wildlife Service (USFWS) was the nation’s first streamlining agreement between federal agencies and a municipal government.

Mike Reed, with the Portland Bureau of Environmental Services Science, Fish and Wildlife Program, has chaired the team since it started its work in 2003. “This award is for each of the participating agencies that have helped create and maintain this strong collaborative relationship,” said Reed. “Our successes couldn’t have been realized without each and every one of the agencies playing a key role in the process.” Reed was instrumental in recruiting team members from NOAA, the Corps, the USFWS, the Portland Bureau of Development Services and the Oregon departments of State Lands, Fish and Wildlife and Environmental Quality.

The Streamlining Agreement has improved working relationships with city project managers and permitting agencies. It has speeded project reviews and helped keep projects on schedule and on budget. And it has fostered strong partnerships and working relations among agencies.

The agreement benefits city bureaus and other local governments as well. The team has helped Portland Fire & Rescue gain permits for its new Station 21 at the Hawthorne Bridge, worked with TriMet on permits for the Portland-Milwaukie Light Rail Bridge, and helped Multnomah County with permits for the Sellwood Bridge replacement project. 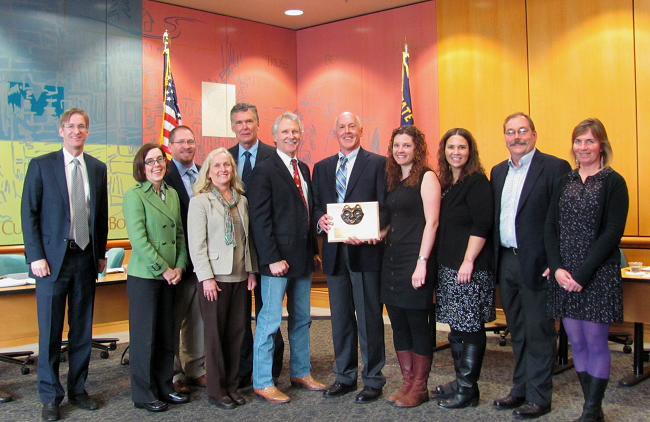