We often think of Portland’s iconic fish—salmon—when we think about our local rivers and streams. It’s true, our waterways are home, resting spots, and spawning grounds for several species of salmon, as well as steelhead and other native fish, like trout.

But, we thought it was high time to show off some of the other critters found in our waters. These two species are important parts of a healthy watershed.  They play a role in the food chain, and also serve as indicators of healthy conditions in our rivers and streams. Both are at risk species in Portland due to loss of habitat and poor water quality. 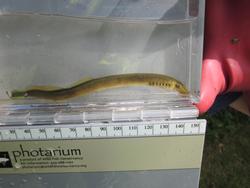 Pacific lamprey are not eels, but they belong to a primitive group of eel-like fishes that eat with a sucker mouth. They have been around for 450 million years – they are older than dinosaurs! Lamprey are native to the Portland area and much of Oregon, and are an important cultural food source for Native American tribes in the Columbia River basin.  Pacific lamprey are are in decline and are listed as a Species of Concern by the US Fish and Wildlife Service.

This lamprey was found during a recent fish salvage event in Crystal Springs. 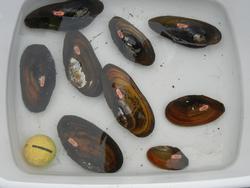 You’ve probably seen mussels at the Oregon coast, but did you know that several types of native freshwater mussels are found in Portland’s waterways? Mussels, like the Oregonand California floaters, are an important part of the food chain, and also help filter water to improve water quality for all of us.

According to the Xerces Society, “In North America, approximately 69% of all freshwater mussels are either extinct, imperiled, or vulnerable to extinction, representing the most at-risk group of all plants and animals.”

Check out this video of the recent effort to relocate mussels in Crystal Springs and read about the project here.