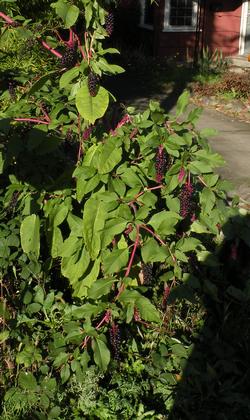 Pokeweed might look decorative, but it is an invasive plant that is blooming and developing berries right now in Portland.  This makes it easy to identify, so it has the dubious honor of being the first plant in our ocassional series on Alien Plant Invaders.  Pokeweed is native to the southeastern United States, but is increasingly popping up around the Pacific Northwest.  We need your help getting this weed under control before it spreads even more!

Why is pokeweed bad?  Birds often eat the berries and carry the seeds to new locations, including natural areas. Left unmanaged, pokeweed can form dense patches and overwhelm native plants and trees.  This damages Portland and the region’s natural areas and parks, which we depend on for clean water, wildlife habitat, recreation and other benefits.

Here’s another reason: although birds seem to be immune to the berries, every part of the pokeweed plant is toxic to people.  Some people eat parts of the plant (poke salad is an example).  But preparation is tricky and ingesting improperly prepared pokeweed can cause severe nausea, or even death.

For more information about identifying pokeweed, check out this fact sheet and this page from our partners at East Multnomah Soil & Water Conservation District.

Environmental Services staff are surveying some neighborhoods for pokeweed to help property owners identify it and give them recommendations for dealing with the plant.  Even if you haven’t received a flyer, we highly recommend removing plants you find on your property.  Put berries and flowers in a bag and in the trash (not in your yard debris bin or compost).  Stems without berries or flowers can be put in yard debris.  Digging up the roots and disposing of them in the trash is the best way to remove the plant.  This requires a lot of digging to get the whole root and will likely need to be watched for a couple of years, in case root pieces re-sprout. 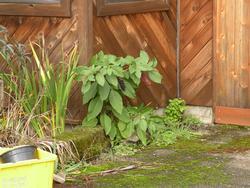 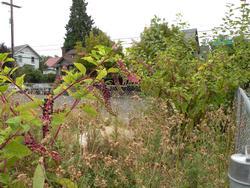 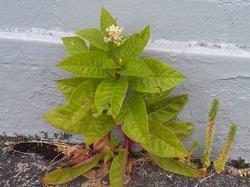 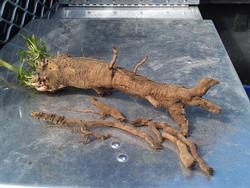 Pokeweed starts off small and may be found in cracks in the sidewalk.  It can quickly grow into a large bush.  The root gets bigger every year and should be dug out completely as soon as possible.

Why do we care about invasive species?  They can cause a lot of damage to our forests, streams and rivers, and property.  Nationwide, damages associated with invasive species cost approximately $120 billion each year.  In Oregon, the control of invasive weeds and the cost of the damages they create amounts to about $125 million each year.  We know that it costs a lot less to control new invasive plants before they become infestations.  This takes help from everyone.  Read more here about the problems caused by invasive species and why BES is particularly concerned about their impact on water quality.

The poke salat (as its known in the south) that we grew up eating is not poisonous, as long as you are eating the young green parts. Yes, you should never eat any of the purple parts or leaves that are beginning to turn purple. It's an amazing dish of greens! Here is more info: https://www.portlandoregon.gov/bes/article/486580