In 2006, Environmental Services completed the Tideman Johnson restoration project to protect a major sewer pipe, protect Johnson Creek from sewage contamination, and restore more natural conditions in the stream.  Since then, we've been monitoring the project to ensure it performs as designed, and we're learning lessons for future stream restoration and infrastructure protection.  Many of Portland’s aging sewer pipes cross or run along streams, and creative approaches help our gray and green infrastructure keep working for clean water. 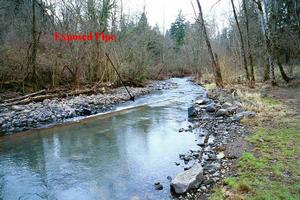 The Lents Interceptor pipe crosses Johnson Creek in Tideman Johnson Park near Cesar Chavez Boulevard.  It conveys wastewater from southeast Portland to a pump station on McLoughlin Boulevard and from there to the wastewater treatment plant in North Portland.  When this sewer pipe was built in 1922, it was buried about five feet below the creek bed.  Over the years, increasing stormwater runoff from development caused more flow in the creek, which exposed the pipe and left it vulnerable to failure.  That would have meant sewage in the creek and other consequences.

The 2006 project reinforced and covered the pipe, building up the stream bed to re-create natural stream dynamics and improve the fish and wildlife habitat.  The streambanks were reshaped and planted with native trees and shrubs, and large boulders and wood were added to prevent erosion, slow the stream, and enhance habitat for salmon.  This approach to the Lents Interceptor problem saved money while also adding environmental benefits.  The alternative - moving the large capacity pipe -  would have been much more expensive, estimated to cost nearly $500,000 more. 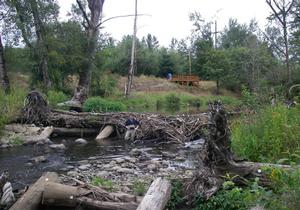 Beaver have constructed dams, stream flows have caused some changes in the channel, and gravels have washed into the area naturally (which is good for spawning salmon).  Native plants have grown in and the sewer pipe remains well-protected.  As this is a steep part of Johnson Creek with high-velocity flows, Environmental Services staff are keeping a eye out for erosion that would make the banks unstable.

Environmental Services is now working with Clackamas County on a similar project to protect an exposed Portland sewer pipe that crosses Johnson Creek near SE Luther Road.  That project is planned for construction in 2014.  We'll make sure to share some photos when that gets underway.

Did you know? When the stream was temporarily diverted for the Tideman Johnson project construction, nearly 7,000 fish were salvaged from the area and relocated elsewhere in Johnson Creek.  99% of the fish were native species, including 23 Chinook salmon and more than 100 steelhead.  Habitat restoration projects like this help Endangered Species Act-listed salmon return and thrive in Portland. 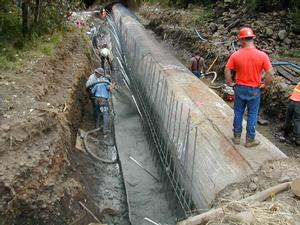 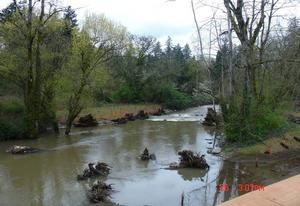